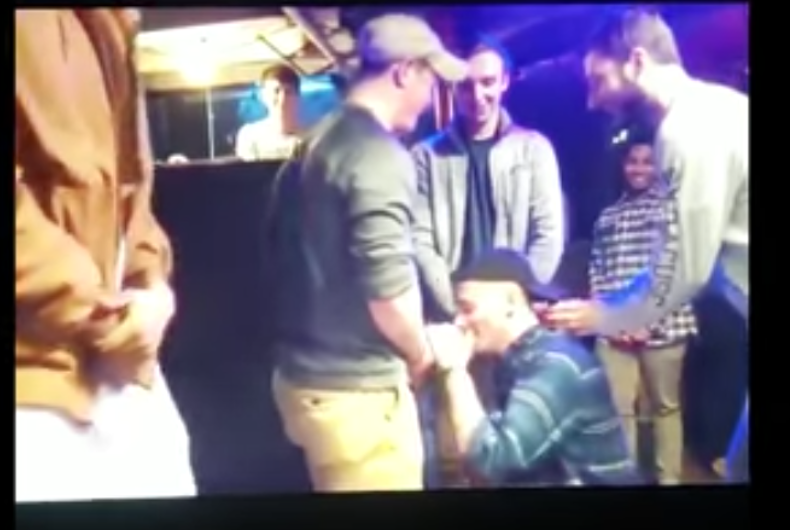 Videos of fraternity members at Syracuse University engaging in a ritual that the administration called “extremely racist, anti-Semitic, homophobic, sexist, and hostile to people with disabilities” have been publicized by the school newspaper. The fraternity has been suspended.

One video shows men from the Theta Tau fraternity taking this oath: “I solemnly swear to always have hatred in my heart for n*****s, sp*cs and most importantly, the fucking k*kes.”

Before the oath, one of the men jokes that it’s “Fuck black people, and fuck sp*cs, amen.”

The video, along with several others, were uploaded to a Facebook group called “Tau of Theta Tau.”

The school newspaper The Daily Orange wrote that in another video, which has not been released, a fraternity member said, “Get together and (talk) about their significant others while drinking different wines and talking in gay girly accents.”

In yet another video, someone said, “He’s drooling out of his mouth because he’s retarded in a wheelchair” after someone sits in a chair.

The Daily Orange received recordings of the videos, but could only confirm that one was posted to the Facebook group.

“I am appalled and shaken by this and deeply concerned for all members of our community,” said Syracuse Chancellor Kent Syverud in an email to students and faculty yesterday.

“Upon confirming Theta Tau’s involvement, the University’s Office of Student Rights and Responsibilities immediately suspended the fraternity, effectively halting all activities,” he wrote. “At this time, all evidence has been turned over to the Department of Public Safety, which has launched a formal investigation to identify individuals involved and to take additional legal and disciplinary action.”

Last night, a protest was organized asking for the other videos to be released and for “accountability.” Most of the students who attended the rally were people of color, and Syracuse University is mostly white.

They marched chanting, “What do we want? Justice. When do we want it? Now,” as well as “Hey hey, ho ho, Theta Tau has got to go.”

More than 400 students attended a forum to discuss the videos yesterday.

Student Association President James Franco said, “I think we also, too, should have an audit of Greek life on campus to re-evaluate its impact on the campus community and its value.”

The university’s Department of Public Safety said that it is investigating the videos.

Can we really listen to Donald Trump & his supporters?