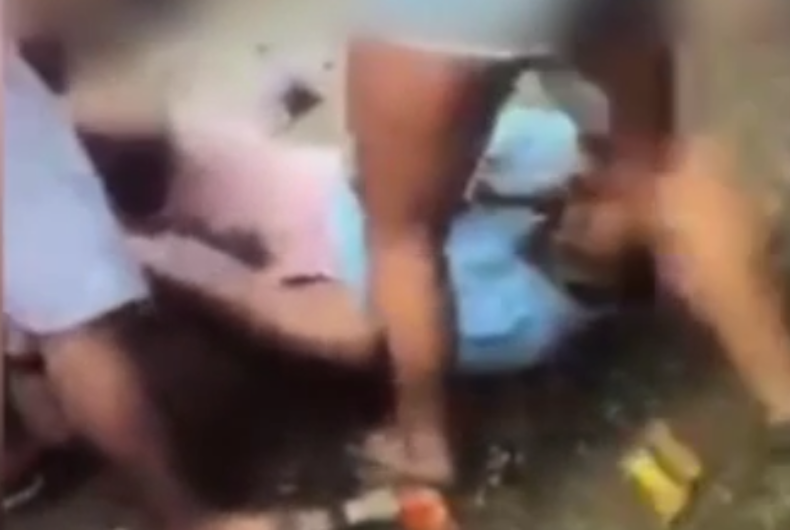 A gay man was beaten up at a frat party, called an anti-gay slur, and was left with a broken leg in a brutal attack caught on video.

Rancel Valdez was attending a party at the Phi Gamma Delta at the University of Delaware last Friday with a friend. Valdez is a former student and lives close to the campus.

He said that he was at the party for a few hours without incident. At one point he was waiting for his friend to come out of the bathroom, and some of the fraternity members told Valdez, who was wearing pink shorts, to leave.

“They were just being rude, telling me to leave, calling me names,” he said.

He said that the men started attacking him and beating him while he was on the ground.

“I ran over, and I’m trying to pull these kids off,” said Valdez’s friend Erica Bundsehuh. “It literally felt like it wasn’t stopping because they would get pulled off and then someone else would just come over.”

Witnesses say that when his leg was broken the bone was protruding out of the skin.

“This is worst pain I’ve ever felt,” he said.

Valdez had to be taken to the hospital, where he spent two days. His leg is broken and he has to carry a bag of painkillers. He will be out of work for a month.

Local police said that they’re investigating the attack as a possible hate crime because anti-gay slurs were used.

Why transgender activists want people to boycott the film ‘Anything’

Christian conservatives want a Senator to resign for talking about homophobia