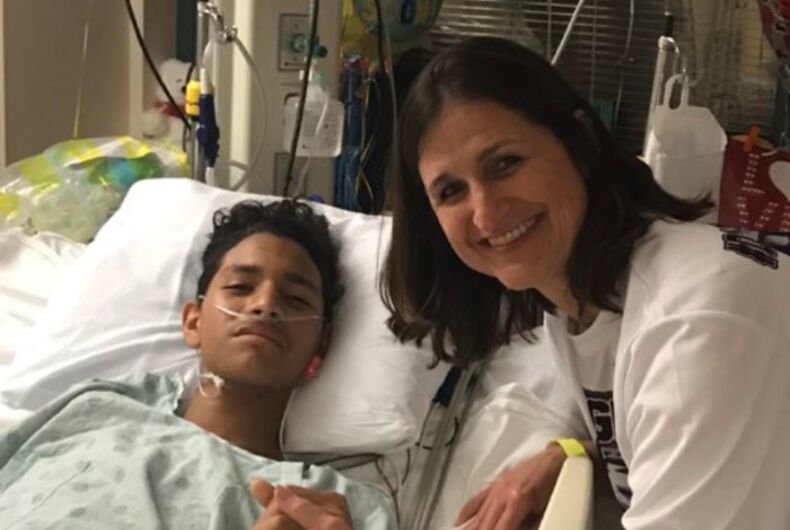 While the mass shooting at Marjory Stoneman Douglas High School in Parkland, Florida, was horrific, one bright spot has emerged in the form of 15-year-old Anthony Borges.

Borges was released from the hospital following intensive medical care to save the young hero’s life. He was shot 5 times as he used his body to barricade the door to protect his classmates.

His extensive injuries required multiple surgeries and extensive recovery care. CNN reports that a third of one of his lungs was removed. He was shot three times in the legs and another bullet ripped through his back, barely missing his liver.

Borges still faces a long recovery and his medical bills are quickly mounting. His family was forced to move after doctors told them he wouldn’t be able to climb the stairs into their home.

A GoFundMe account has been set up to help cover his care; $800,000 has been raised so far but his long term care could quickly eat that amount up.

He doesn’t consider himself a hero, but plenty of others obviously do.

“A lot of people are very thankful for what you did. Have you even thought about that?” he was asked on NBC’s Today Show.

Still unable to speak normally, Borges shook his head no.

The most gravely wounded survivor of the Parkland school shooting speaks exclusively to @kerrynbc pic.twitter.com/4SkVPk3GTk

Please pray for my amazing student Anthony Borges! He is a hero who was shot 5 times last week & has a long recovering ahead🙏🏼🙏🏼🙏🏼🙏🏼#MSDStrong #NeverAgain #MSDEagles #douglasstrong pic.twitter.com/oqvBL6bSwC

A trans teen was told her senior photos were ‘inappropriate.’ They weren’t for long.

Why will religious right leaders be meeting with Trump during Pride month?