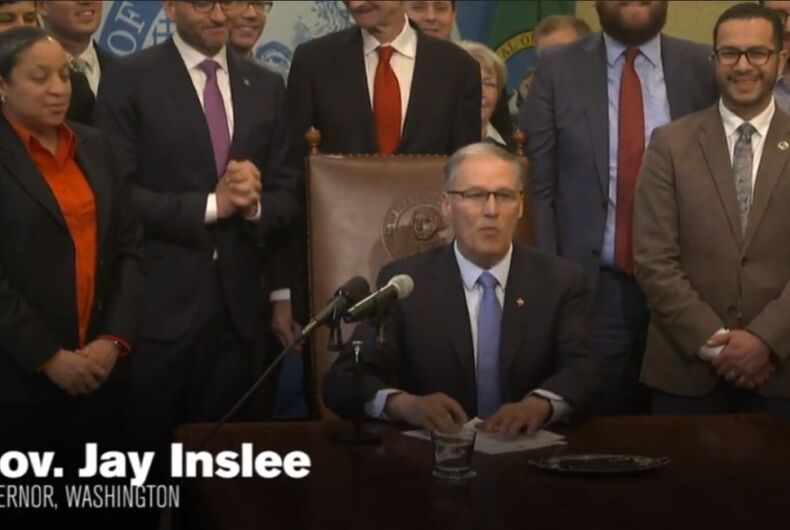 Washington has become the tenth state to pass a ban on conversion therapy on minors.

Gov. Jay Inslee signed the legislation banning the debunked and dangerous practice on Wednesday. The law takes effect in June, and will deem any therapy attempting to change the sexual orientation or gender identity of any person under the age of 18.

The law defines conversion therapy as “a regime that seeks to change an individual’s sexual orientation or gender identity, including efforts to change behaviors or gender expressions, or to eliminate or reduce sexual or romantic attractions or feelings toward individuals of the same sex.”

“Conversion therapy does not include counseling or psychotherapies that provide acceptance, support, and understanding of clients or facilitation of client’s coping, social support, and identity exploration and development that do not seek to change sexual orientation or gender identity,” it continues.

There does remain a religious exemption, saying “non-licensed counselors acting under the auspices of a religious denomination, church, or organization may not be construed to be unprofessional conduct.”

“Conversion therapy is not so much therapy, it’s abuse, and we are today prohibiting the abuse of our children,” said Inslee. “Conversion therapy, which has caused scars for decades across the country, is something that is inhumane and not acceptable in the state of Washington. We know today there are nationwide efforts to strip away the protections of our LGBTQ youth, and to prevent them from living safe, stable, and confident lives. As many of our friends, neighbors, and children today live in fear, we need to step up for them to protect them from conversion therapy, and we’re doing that today.”

“No child should be put through the dangerous and abusive practice of conversion therapy,” said Human Rights Campaign President Chad Griffin in a statement. “Medical professionals agree this harmful and discredited practice not only doesn’t work, but can also have life-threatening consequences. We thank the many advocates, allies, parents, and survivors who spoke out against conversion therapy and urged their elected officials to adopt these crucial protections. We also thank Governor Inslee and the Washington State Legislature for enacting this legislation to protect LGBTQ youth.”

“Today we applaud Washington state Governor Jay Inslee’s decision to sign into law SB 5722. We are heartened by the progress made by legislators to uphold the safety, health, and well-being of LGBTQ individuals in Washington state,” said National Center for Lesbian Rights Youth Policy Counsel and Born Perfect Campaign Coordinator Carolyn Reyes. “We know that few practices hurt LGBTQ youth more than attempts to change their sexual orientation or gender identity through the debunked practice of ‘conversion therapy.’ Washington state sets an example for the rest of the country in ensuring every child knows they are born perfect.” ​

The Maryland Senate approved a bill today that would ban conversion therapy there as well.

Other states attempting to ban the practice include Colorado, Maine, Minnesota, and Missouri.