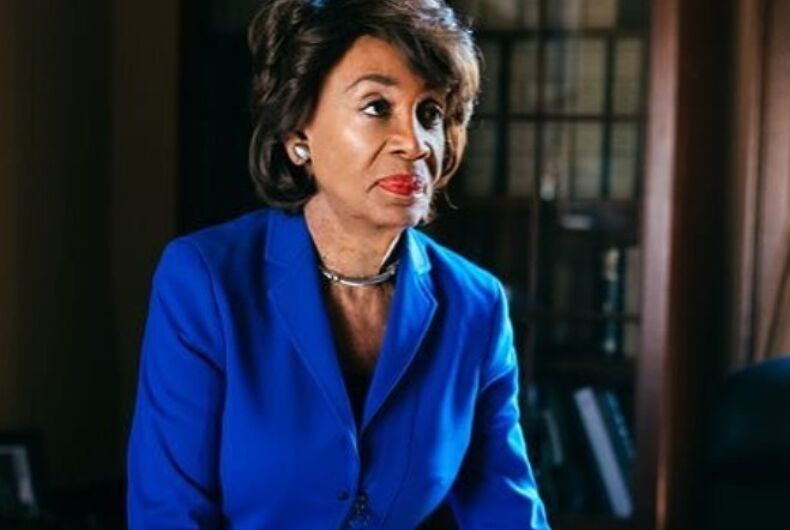 Last night the Gridiron Club and Foundation hosted its annual spring dinner, a private, by-invitation-only event where journalists and politicians crack jokes about each other.

It’s a safe space for the most powerful people in the country to stop pretending like they have an adversarial relationship and schmooze.

When Donald Trump took the stage, he told a few innocuous jokes about famous figures in D.C. “You know, it’s weird, I offered him a ride over — and he recused himself,” Trump said about Attorney General Jeff Sessions.

But when he got to Representative Maxine Waters (D-CA), who is African American, Trump didn’t hold back.

“‘He must be impeached!’ That’s all she knows how to say,” he said. “And I say — and I get in trouble for this — ‘she has to immediately take an IQ test,’ and people go crazy.”

“There’s so much hatred,” he added, betraying an incredible lack of self-awareness. “We have to stop the hatred.”

Waters slapped back at Trump on Twitter this morning.

For a president whose own staff & appointees have referred to him as ignorant, stupid, & whose own Sec. of State Tillerson has not denied calling him a moron, Trump needs to get out of the name calling game.

Waters’s IQ has long been the butt of the alt-right’s jokes. This tweet is from last June:

What is Maxine Waters' IQ?

This meme has floated around the rightwing swamp for years.

And other memes include her.

Waters was one of thirteen children raised by her single mother. She worked at a garment factory after high school, only to later attend college and build a career in politics.

She has served in Congress since 1991 and has never held back in criticizing the right and racism. In 2011, when a conservative called her an “overseer” in the Democratic Party’s “plantation,” she responded, “And as far as I’m concerned — the tea party can go straight to hell.”

Unlike Trump, an heir to a fortune who is proud of his ignorance, Waters had to work hard to get where she is today. There’s no reason to believe that she’s dumb.

But the jokes aren’t just saying that she’s unintelligent or anti-intellectual. They’re saying that she is biologically inferior. Racists, who consider black inferiority a “biological fact,” often use accusations of low IQ to attack African Americans.

Trump has probably seen this joke before, considering all the time he spends on Twitter. He knew what he was saying.

Trump made an incredibly racist crack about Maxine Waters needing to take an IQ test tonight at the Gridiron and it has barely even registered a mention in coverage of the event. An appalling moment that I can’t believe isn’t everyone’s lead takeaway.

RuPaul: Women won’t be allowed to compete on ‘Drag Race’