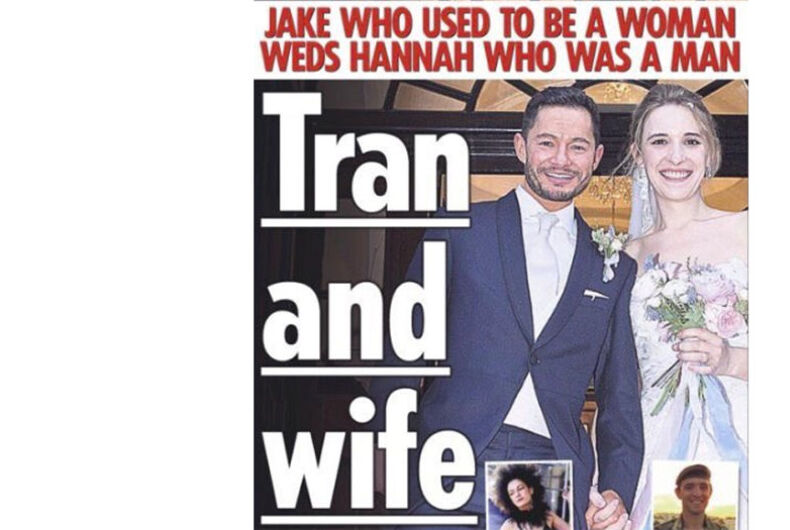 "The Sun" has drawn criticism for this insulting coverPhoto: The Sun

“Tran and wife.” That’s how The Sun headlined its cover story on the wedding of Britain’s highest ranking transgender soldier, Hannah Winterbourne, and trans filmmaker and actor Jake Graf.

The couple wed at Chelsea’s Town Hall in London, and it was the Disney style dream wedding Winterbourne had always wanted.

“Growing up, I’d watch Disney films and there would always be a beautiful woman in a beautiful gown,” she said. Her dress was designed by top stylist Joe Woolfe, who also dresses Benedict Cumberbatch, Graf shared with Pink News.

“You’d always look at feminine things and wish it could be you but I wasn’t able to express it,” Winterbourne added. “There are not many more things that are feminine than a bride in a beautiful wedding dress. I never thought when I was young it could happen to me.”

First wedding photo!!😀❤️👫🌈👰🏼 . We’re on the front page of UK’s @TheSun today, with a really lovely article despite the pretty offensive front page headline, and lots of media wanting to hear our story. 😊 Let’s try and get some positive reporting on trans lives going on! ❤️Huge thanks to @joewoolfe at @labassawoolfe for my suit, and @ianstuart_bride for Hannah’s stunning dress!!❤️ . . . . . #trans #wedding #marriage #transgender #lgbt

“I never thought any of this was a possibility,” said Graf. “Now I’ve got this beautiful Army captain wife and I’m so happy.”

But The Sun‘s decision to sensationalize their cover, after being granted an exclusive interview, has left the couple hurt.

Beneath its disrespectful headline, the words: “Jake who used to be a woman weds Hannah who was a man.”

He tweeted that it was “a real shame”that “a lovely, positive article” has been “cheapened by such a sensationalized and misleading headline.”

Winterbourne said it was, “A shame that our beautiful day…has been marred by fairly offensives headlines.”

Graf told Gay Star News the couple “strongly felt that getting our story out to a mainstream audience was important.”

“Whilst The Sun has a less than positive history when it comes to reporting on LGBT issues, it did feel that there had been a real turn around in the last year or so, with some very sympathetic and supportive reporting on trans issues,” he added.

“We were assured that the story would be positive, which we feel it was, and were obviously very disappointed when it was let down by such an offensive and garish headline and front page,” he continued.

Still, he found a way to look for the silver lining.

“Naturally the community is upset, as are myself and Hannah, but we have to remember that their readers will know little to nothing about trans people, so once they get past the front page perhaps they will learn a little more about us and see that we are just like any other couple on our wedding day,” he observed.

Still, that cover though.

Author and television host Sarah O’Connell decided to fix it:

I’ve fixed the cover for them. pic.twitter.com/qNYi08vovb

And may they live happily ever after…

Man tells school board the superintendent bullied him in high school. His bully laughed at him.

GetEQUAL is shutting down & PFLAG may be next