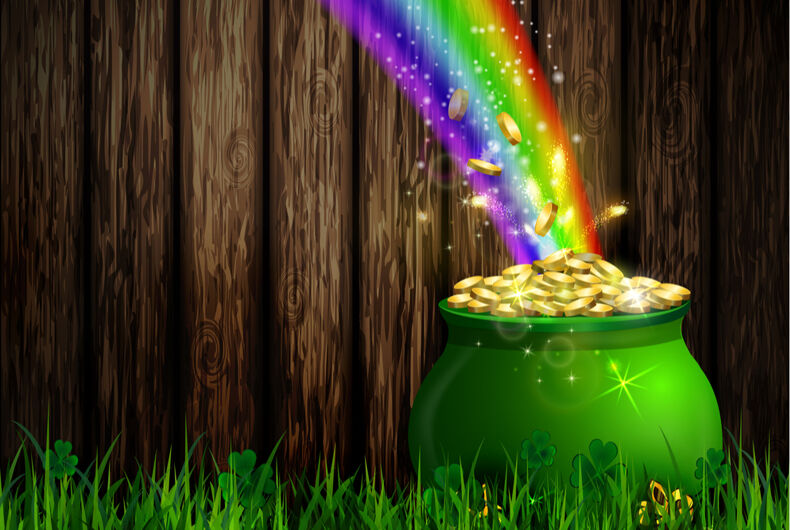 Saint Patrick’s Day is a time for grand celebration in many parts of the world, with green beer and shamrocks sprouting in the most unlikely places. So what do you do, if you want to join in the fun, but cannot find a trace of green blood in your ancestry, no matter how far back you go?

You claim a direct family connection, that’s what – your extensive, extended queer family. Yes, good old St Patrick is one of a surprising number of queer saints and martyrs in Christian history, giving us all an excuse to enjoy his day.

In his book on Irish gay history, Terrible Queer Creatures, Brian Lacey presents some evidence that Patrick may have had a long term intimate relationship with a man:

St. Patrick himself may have had a relationship tinged with homoeroticism. Tirechan, a late seventh century cleric who wrote about St. Patrick, tells the story of a man Patrick visited and converted to Christianity, who had a son to whom Patrick took a strong liking.

Tirechan wrote that “he gave him the name Benignus, because he took Patrick’s feet between his hands and would not sleep with his father and mother, but wept unless he would be allowed to sleep with Patrick.” Patrick baptized the boy and made him his close lifelong companion, so much so that Benignus succeeded Patrick as bishop of Armagh.

This is a rather tenuous basis for a claim that Patrick was gay, but there is more from his youth. He was originally brought to Ireland as a Roman slave – and they were freely used for sexual purposes. Later, he escaped, but returned to undertake the evangelizing of Ireland that he’s famed for. To pay his way back, there is a claim that he worked as a prostitute.

This is still short of really hard evidence – but hagiography is not history. The most famous popular belief about St Patrick, that he chased the snakes out of Ireland, is certainly not true (there never were any), but that doesn’t deter anybody from repeating it, regardless. Why should we allow the absence of definite proof keep us from joining in the fun?

Irrespective of our view on the historic Patrick, there’s a deeper, serious reason for thinking about him.

For too long, Christianity has been badly abused as a weapon against sexual minorities, but there are undoubtedly a large number of people in church history that in today’s terminology, would be considered queer, but who nevertheless achieved high office in the Church, as bishops, abbesses and popes, or honored as Christian saints and martyrs.

Secular historians have gone a long way in uncovering our hidden history. Doing the same for our place in church history can make a small contribution to countering religious bullying. Just consider: the next time you hear offensive remarks from a homophobic Irish neighbor or colleague, just point out to him: St Paddy was queer.

Terence Weldon is a UK based gay Catholic activist and one of the organizers of the London Soho Masses for LGBT Catholics. He writes on general matters of faith and sexuality. This article was first published on Bilerico in 2012.

Meet Matthew Olshefski, the concert violinist with a heart of gold & pecs of steel