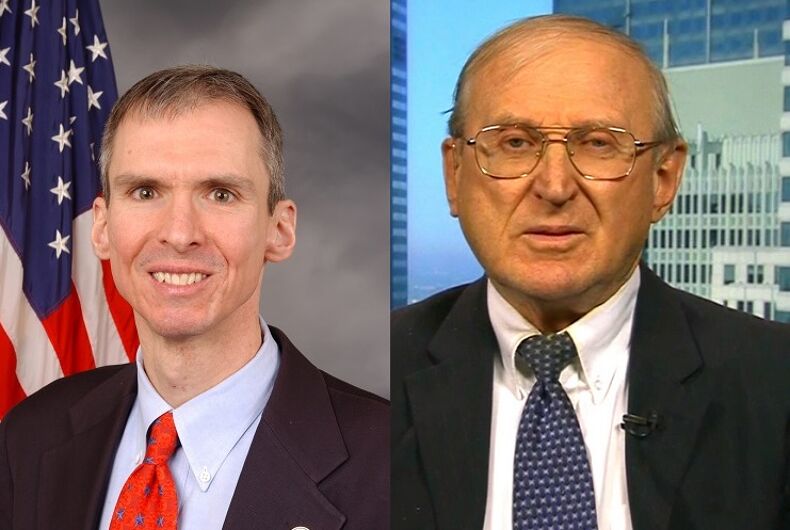 In the Democratic primary in the same district, Dan Lipinski, the most anti-LGBT Democratic Representative in Congress, won.

Illinois’s 3rd district is fairly liberal. 55% of the district voted for Hillary Clinton in 2016, while only 40% voted for Donald Trump.

Jones is an actual Nazi

The Republican’s 2018 campaign website says that the Holocaust is the “biggest, blackest lie in history,” made up by the “organized jewry” to “extort and terrorize” others. He is the co-founder of the neo-Nazi America First Committee and has hosted events to honor Adolf Hitler’s birthday.

Jones opposes interracial marriage and said that African Americans shot by police “got what was coming to ‘em.” He freely uses the n-word and, at a 2017 rally, said that his goal is “the preservation of America as a white nation.”

He also doesn’t like LGBT people, once promising at a rally, “And the queers, you’re gonna go back in your closets.”

He won yesterday because he ran unopposed. Two years ago, the Illinois Republican Party didn’t have a candidate in that seat either, but they contested the signatures on Jones’s nomination petitions and had him removed from the ballot.

Jones said that this year “the Republican Party screwed up big time.” And when party leaders became aware that he would be their nominee in the district, they ran robocalls in the district to denounce him.

“Arthur Jones is not a real Republican — he is a Nazi whose disgusting, bigoted views have no place in our nation’s discourse,” Illinois Republican Party chairperson Tim Schneider said in one of those calls.

Jones, though, is a major supporter of Donald Trump. “I agree with a lot of what Mr. Trump has to say,” he said in 2016. “He’s his own man. I like the fact that doesn’t have to go hat in hand to Jewish billionaires to get money.”

Republicans say they will be backing an independent candidate in that district.

The Democrat is the worst on LGBT issues

Representative Dan Lipinski has held that seat since 2005, and his father held it before him.

Lipinski is a conservative “Blue Dog” Democrat who opposed major Democratic initiatives like the Affordable Care Act and the DREAM Act. He is also anti-choice.

He has been the Democrat with the lowest score on HRC’s Congressional Scorecard for years, refusing to co-sponsor LGBT rights bills like the Student Non-Discrimination Act and the Equality Act, which other Democrats co-sponsored.

In 2011, he opposed efforts by Congressional Democrats to repeal DOMA and he has continued to say that he opposes marriage equality. In 2015, Lipinksi was the only Democrat to co-sponsor the First Amendment Defense Act, a bill that would have banned discrimination based on someone’s “belief that marriage should be limited to heterosexual couples.” And in 2016, he supported the Religious Freedom Restoration Act, which would have permitted businesses to discriminate against LGBT people.

Even the DCCC – hardly a far-left organization – refused to back the incumbent in this race.

But Lipinski still won, a sign of the strengths incumbents bring to congressional races.

So this fall, the left-of-center district will have a choice between a Nazi, a conservative Democrat, and a still-unnamed rightwing independent.

At least the Democrat is heavily favored to win.