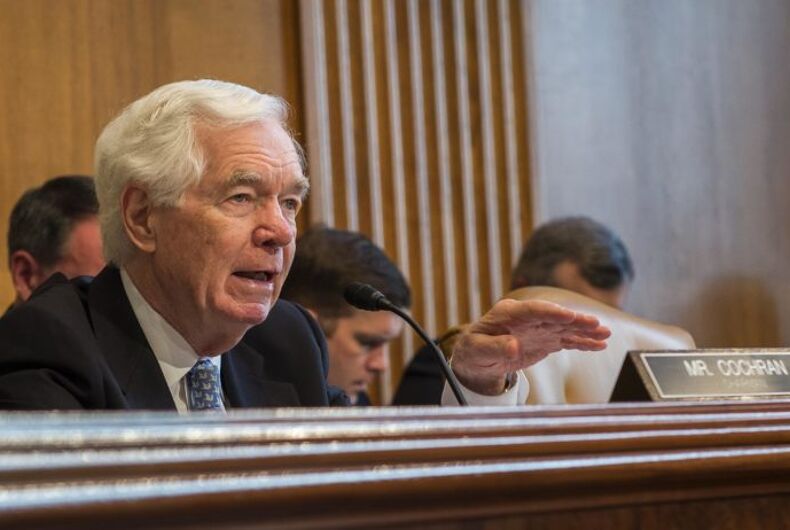 Sen. Thad Cochran has announced he will step down due to health concernsPhoto: U.S. Air Force photo/Jim Varhegyi

Sen. Thad Cochran, of Mississippi, has announced he will step down, effective April 1, citing health concerns.

“I regret my health has become an ongoing challenge. I intend to fulfill my responsibilities and commitments to the people of Mississippi and the Senate through the completion of the 2018 appropriations cycle, after which I will formally retire from the U.S. Senate,” the 80-year-old said in a statement on Monday.

Cochran has been praised for his “quiet stately demeanor,” as USA Today put it, earning him the nickname “Gentleman Thad” by his peers in Congress.

Republican Gov. Phil Bryant will appoint Cochran’s temporary replacement within 10 days of his departure, with an election in November to determine who will serve the remaining two years of his term.

While we wish him the best with his health, we are not sad to see him leave the Senate.

Cochran has been an enemy to equality throughout his storied career, earning himself a 16% rating by the Human Rights Campaign. Here are some of the reasons we aren’t sad to see him leave.

Cochran voted against marriage equality in 1996, and again in 2006, voting in favor of a constitutional ban on same-sex marriage. He also made clear he felt state law should trump federal law when it comes to marriage.

Cochran also voted against same-sex adoptions, with his “No” vote on the Every Child Deserves a Family Act. It would prohibit public child welfare agency that receive federal financial assistance from discriminating against potential foster or adoptive parents on the basis of actual or perceived sexual orientation, gender identity, or marital status.

He also voted against adding sexual orientation to the definition of hate crimes, both in 2000 and 2002. In 2009, then-President Barack Obama signed the Matthew Shepard and James Byrd, Jr. Hate Crimes Prevention Act, adding actual or perceived gender, sexual orientation, gender identity, and disability to the categories protected under existing federal hate crime law.

Voted to Allow Broad Discrimination Across Various Areas of Life

Cochran didn’t see a piece of anti-LGBTQ discrimination legislation he couldn’t get behind.

He voted against the Equality Act, which would prohibit anti-LGBTQ discrimination in employment, housing, credit, education, public accommodations and services, federally funded programs, and jury service.

He also voted against other bills that offered those protections, including the Fair and Equal Housing Act, Freedom from Discrimination in Credit Act, and the Jury ACCESS Act.

Additionally, he voted against prohibiting police from profiling, with the End Racial and Religious Profiling Act, which would prohibit law enforcement from targeting persons based on actual or perceived race, ethnicity, national origin, religion, gender, gender identity, or sexual orientation without evidence linking them to a crime.

Voted Against Keeping LGBTQ Human Rights Violators Out of the Country

Cochran voted against the Global Respect Act of 2017, which would impose sanctions on LGBTQ human rights violators and bar them from entering the United States.

Voted Against Ending the Criminalization of People Living With HIV/AIDS

A number of laws passed during the height of the HIV/AIDS epidemic, when fears and lack of understanding were still ruling the decision making in government, have criminalized harmless behavior from those living with HIV/AIDS, like spitting. The REPEAL HIV Discrimination Act would require a review of federal and state laws that impose these criminal liabilities on individuals with HIV.

Cochran voted…you guessed it, against.

He also voted against LGBTQ-inclusive sex education in schools, casting his “No” vote on the Real Education for Healthy Youth Act, to fund training of teachers in appropriate and comprehensive sex ed.

Cochran struck yet another blow against young people’s health when he voted against banning conversion therapy. The Therapeutic Fraud Prevention Act, which failed to gain his support, would classify the provision and advertising of conversion therapy (aka “pray the gay away”) in exchange for monetary compensation as a fraudulent practices.

Voted Against A Measure to End Harassment on College Campuses

Finally, Cochran also voted “No” on The Tyler Clementi Higher Education Anti-Harassment Act, named after a gay student at Rutgers University who committed suicide following an invasion of his privacy and bullying. It would require colleges and universities that receive federal student aid funding to prohibit harassment, and to establish a grant program to support campus anti-harassment programs.