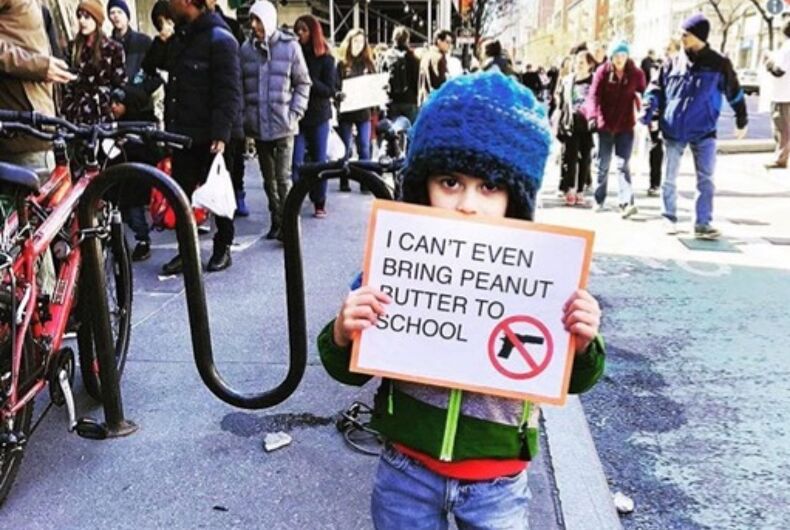 Hundreds of thousands of youth, activists, grieving friends and parents, and victims of gun violence, streamed into Washington, DC on Saturday for the March For Our Lives. The crowd snaked for dozens of blocks as the masses walked walked through the city with signs demanding gun reform, chanting their demands for the return of commonsense.

20 youth are scheduled to speak from the stage and the event is live streaming below. Ariana Grande, Common, Miley Cyrus, Jennifer Hudson, Vic Mensa, Lin-Manuel Miranda and Ben Platt are scheduled to perform.

Hundreds of sister marches have turned out hundreds of thousands more across the country. We’re bringing together video and photos from around the country below.

Many LGBT organizations and state equality groups are participating in the marches.

“GLAAD stands with the young activists around the country who are taking the streets to demand that their lives and safety be our nation’s top priority and that we end this epidemic of mass school shootings,” said Sarah Kate Ellis, President and CEO of GLAAD said in an emailed statement.

“The LGBTQ community knows the impact, importance, and heartbreak of this issue all too well. The Pulse tragedy led our movement to say “enough is enough,” and we must continue to stand up and lock arms with gun reform advocates to end this senseless violence.”

My plane from Miami to DCA is filled with countless people -friends and strangers- leaving the warmth to go support our local #MDstrong kids at #marchforourlives. pic.twitter.com/XmWPeliBZL

#MarchForOurLives continues through the heart of St. George. #VoiceOfDixie pic.twitter.com/ANJev3jEVX

Massive turnout in Raleigh, North Carolina for the #MarchForOurLives#NeverAgain pic.twitter.com/RmJvK9frMx

I wasn’t even 2 days old when Columbine happened. My generation doesn’t know a life without school shootings, and too many students won’t ever get the chance to know anything different #marchforourlives #neveragain pic.twitter.com/KufhXd3TaG

Crowds are starting to gather here in Downtown LA for the #MarchForOurLivesLA. @KPCC pic.twitter.com/GzjwX4YZ8x