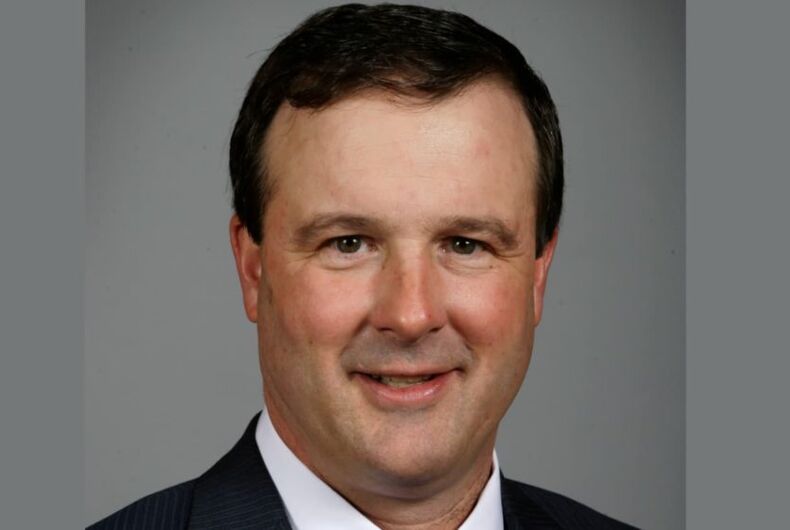 A kiss and a video have brought down Iowa’s Senate Republican Caucus leader.

Bill Dix, 52, labeled himself a family-values conservative. The 18-year legislative veteran, married with three children, had co-sponsored a constitutional amendment defining marriage as between a man and a woman.

But Dix’s man-and-woman approach eventually manifested itself in a 52-second video clip that showed a female Iowa lobbyist leaning from a barstool to kiss him. It was posted to the Iowa Starting Line political website on March 12.

When Dix ran unsuccessfully for Iowa’s 1st Congressional District in 2006, he touted his role in the anti-LGBTQ marriage amendment, according to the New Civil Rights Movement.

“I not only sponsored and voted for this amendment, but I was a leader who helped shepherd this amendment through the Iowa House,” Dix had said.

“Liberal activist judges are threatening our family values, and you can count on me to be a leader in Congress who will stand up to them and work to pass this amendment to the United States Constitution.”

A farmer from Shell Rock, in northeast Iowa, Dix helped Republicans gain control of the Iowa House in 2016, and the 2017 session brought a wave of conservative legislation, the Des Moines Register reports.

Anderson had complained about a toxic work environment before Dix fired her. Dix then faced calls to resign in how he handled the case, the Des Moines Register reports.

Iowa House Speaker Linda Upmeyer, also a Republican, told the Register that legislators are in positions of power and should avoid romantic relationships with people who may influence their decisions.

“That’s not the position we want to be in, and it’s not a position we should be in,” Upmeyer said. “We know better.”