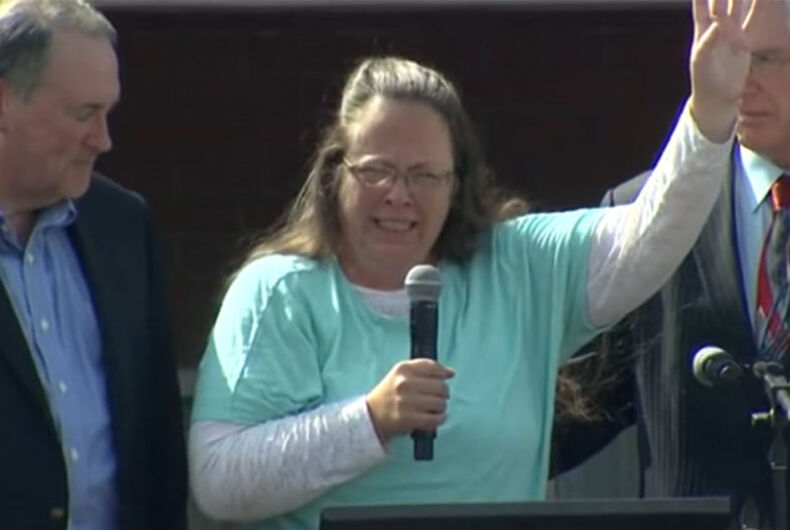 Kim Davis, with Mike Huckabee (l) and Mat Staver (r), after being released from jailPhoto: Screenshot

Evangelical Christian legal group Liberty Counsel filed a brief on Wednesday to block the state of Kentucky from paying legal fees to the ACLU resulting from its suing of their client, Kim Davis, the county clerk who refused to issue marriage licenses to same-sex couples.

U.S. District Judge David Bunning ruled in July the state was on the hook for $222,695 in fees to the attorneys of two same-sex couples and others who sued Davis, as well as awarding $2,008.08 in other costs.

“Davis represented the Commonwealth of Kentucky when she refused to issue marriage licenses to legally eligible couples. The buck stops there,” Bunning wrote in his ruling.

Attorney Mat Staver, who heads up Liberty Counsel and represented Davis, said at the time it would appeal, criticizing the ruling that Davis lost her case, and the state was therefore responsible to cover the ACLU’s legal fees, as the state legislature changed the law in 2016 to remove the names of county clerks from marriage licenses.

“The law in the Sixth Circuit is clear that plaintiffs who obtain only preliminary relief that does not end their case are not ‘prevailing parties,’” said Staver in a statement. “Kim Davis won this battle for religious liberty when Governor Bevin and the Kentucky General Assembly gave her the accommodation she was always due.”

William Sharp, legal director for the ACLU of Kentucky, said at the time of Bunning’s ruling he hoped it would serve to remind officials “willful violations of individuals’ civil liberties…will not only be challenged but will also prove costly.”

“It is unfortunate that Kentucky taxpayers will likely bear the financial burden of the unlawful actions and litigation strategies of an elected official, but those same voters are free to take that information into account at the ballot box,” he added.

Davis is running for reelection, as a Republican, and will face off against four Democrats, including David Ermold, whom she denied a marriage license, along with his now-husband David Moore.