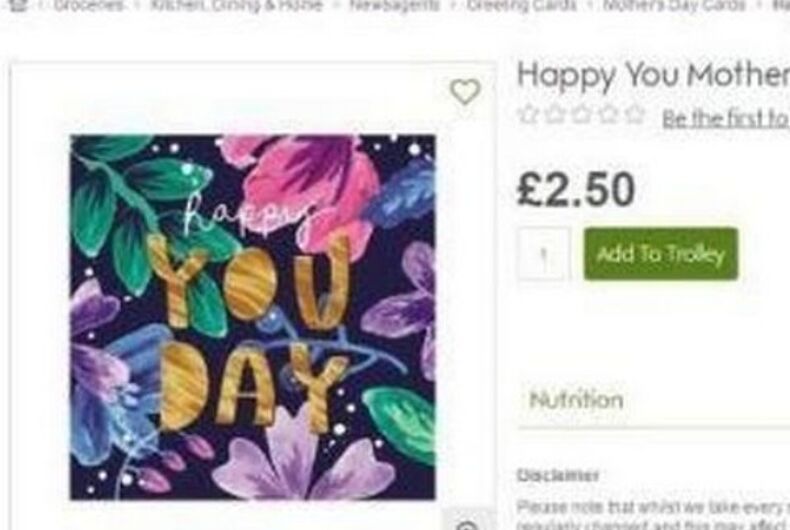 It’s Mother’s Day in the UK, and the British supermarket chain Waitrose is offering a Mother’s Day card on its website that doesn’t use the word “mother.”

Instead, the card says, “Happy You Day.”

In a statement, Waitrose said that the card is for all sorts of parents. Offering it is about “broadening out who the cards can go to, whether it’s grandmas or transgender mums.”

Plenty of cards that use the word “mother” are still available, but conservatives were outraged at the mere existence of the “You Day” card.

OMG Waitrose are now selling trans gender MOTHERS DAY cards! Oh please Fuck off! What are we coming too? 🙈🙈🙈🙈🙉🙉🙉🙉

This person appears to want a “Happy Uterus Day” card.

I didn’t grow my child in my “neutral”. I grew her in my uterus. Happy MOTHERS Day to women who did the same. @waitrose pic.twitter.com/SKbAReQ9az

Will the Trans agenda never stop? Now they attack, aided and abetted by @waitrose , Mums on Mother's Day.Have we had a statement from Tom Daly yet?LOL https://t.co/lR3UjFayZu

So, the effect of this insanity is the gradual erosion of the female.

The logical upshot of radical left wing identity politics – and the sheer thickness displayed by these big businesses who weakly play to their agenda. https://t.co/vv9CeyqhFu

The card is no longer available on Waitrose’s site, but other Mother’s Day cards are still there.