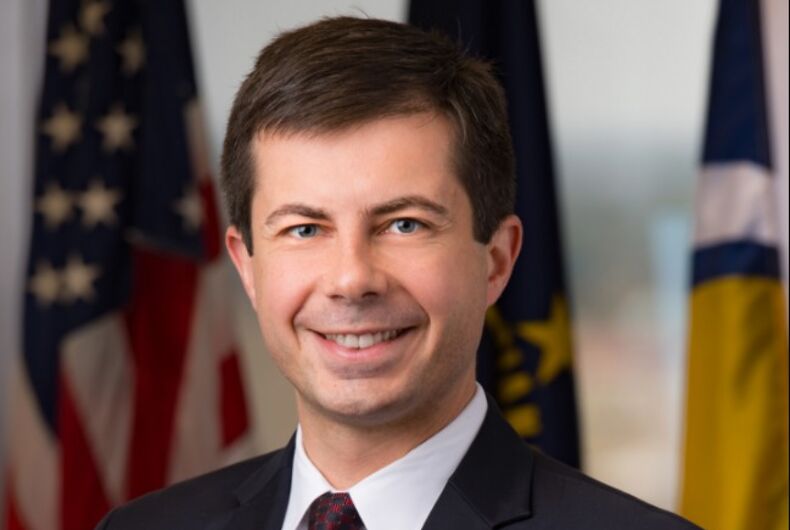 Pete Buttigieg is a rising star in the Democratic party. A Harvard grad, Rhodes scholar and Afghanistan war veteran, he has a sterling resume. As the mayor of South Bend, Indiana, Buttigieg also brings the heartland touch that the Democrats frequently lack.

Buttigieg also happens to be gay and engaged to be married.

Put all of his qualities and experience together, and you have a ready-made candidate for higher office. Apparently, Buttigieg agrees. He’s eyeing a run for president in 2020.

According to Politico, Buttigieg has assembled a PAC that’s investing in early primary/caucus states, including all-important Iowa. He’s courting key Democratic political operatives and national reporters. He’s popping up in other states to campaign for fellow Democrats. All in all, Buttigieg is closely following the playbook for a presidential campaign.

Buttigieg believes that the time is ripe for a candidate like himself.

“I think it’s maybe a sign of the times. I think it’s telling you that things are kind of wide open in a way that hasn’t been true in a long time. I think it shows that there is an interest in the middle of the country,” Buttigieg says in a Politico podcast.

“I think it shows that there’s at least curiosity, if not appetite, for what a newer generation of leaders is going to look like. And I think it reflects the fact that we’re really living in a season for cities and for mayors.”

Buttigieg is certainly ambitious. Last year, he made a credible run at being chosen as head of the Democratic National Committee. Along with the potential presidential campaign, he’s raising his visibility as a power player within the party.

Buttigieg’s path to the White House is all uphill. He lacks federal government experience. Successful presidential candidates usually have at least a governorship under their belt; no mayor has been nominated by a major party in modern times. Even Buttigieg acknowledges that it’s a leap from running a city of 101,000 to the entire country. Of course, stranger things have been known to happen. See: Trump, Donald.

The other major question is whether even the Democrats are open to an out gay nominee. The only other out candidate for president was Fred Karger, who ran a quixotic campaign for the Republican nomination in 2012.

It may be that Buttigieg is positioning himself for a high-level job (such as a Cabinet position) in the event that a different Democrat wins the White House in 2020. At 36, he’s young enough to be able to play a long game.

Whatever the case, Buttigieg is pointing to a new direction for the Democrats. “There’s no going back. There’s no ‘again’ to be had. Things are going to be different,” Buttigieg says.

It’s an era that Buttigieg wants to help shape.