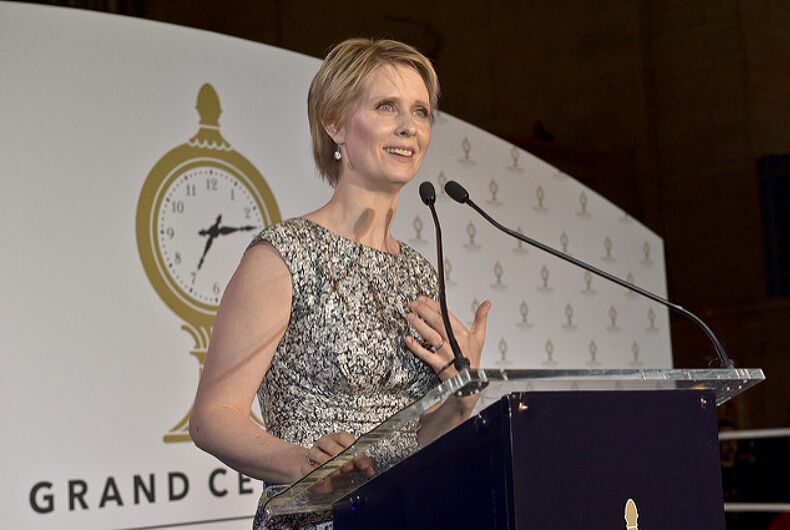 Actress Cynthia Nixon appears ready to attempt to launch a political career, reportedly eyeing a run for Governor of New York. Nixon would run as a Democrat, challenging Gov. Andrew Cuomo in the primary.

Nixon, best known for playing Miranda Hobbes on Sex and the City, has not been denying rumors that she will run. When asked about those rumors back in August on the Today show, she laughed and said she had heard them too, before launching into what sounded like campaign rhetoric about the spending disparity in New York’s public schools.

“There are a lot of people who would like me to run for a variety of reasons,” she said.

Just months before, while appearing on The View, she criticized Cuomo for, as she said, “shortchanging the children of New York.”

Nixon has reportedly began conversations with Democratic strategists Bill Hyers and Rebecca Katz, both former advisers to New York City Mayor Bill de Blasio. Nixon has been one of the mayor’s most visible supporters, and her wife, Christine Marinoni, works in his administration as a special adviser for community partnerships in the Department of Education.

Nixon’s publicist Rebecca Capellan declined to comment on the nature of her talks with Hyers and Katz.

“Many concerned New Yorkers have been encouraging Cynthia to run for office, and as she has said previously, she will continue to explore it,” Capellan told The New York Times. “If and when such a decision is made, Cynthia will be sure to make her plans public.”

Hyers and Katz, like Nixon herself, represent the more progressive wing of the Democratic faction, while Cuomo enjoys supports primarily from more moderate members of the party.

If Nixon were to run and win, she would make history two times over, as the state’s first openly bisexual and first female governor.

Nixon is also an activist around education issues, and has reportedly been studying up on other issues, such as transportation, considered one of Cuomo’s weak spots for potential challengers.

She recently took a swipe at “corporate Democrats” during her acceptance speech at the Human Right’s Campaign’s New York Gala, where she received a Visibility Award. She argued that the Democrats had to be “more than the anti-Trump party,” and stressed the “offer a different vision of how things could be.”

“Our leaders can’t just say, ‘Vote for me because I’m not Donald Trump,'” she continued. “We need to give voters something to vote for, because the fact of the matter is Donald Trump didn’t just come out of nowhere…He was able to expose, and then exploit, in a sickening way how desperate working people are and how little the Democratic Party is paying attention to them, because no different than the Republican Party, it has been focused for too long, and too intently, on the big money interests that fund its campaigns.”

1) These two clips are really worth watching. Looks like Cynthia Nixon has decided to join the revolution. pic.twitter.com/GW3LvzGnxZ

2) Miranda goes full Bernie Bro. Maybe she should run for something. In New York. Against a sitting politician. Rhymes with “Slow Mo.” pic.twitter.com/b0v5MedS4n

Last month, she penned an article for CNN, encouraging political activism, and urging more people from the left to run for office.

“Given the current state of the union, taking our country back is going to require all of us everyday people to step up and take action — whether by protesting anti-immigrant policies, organizing for women’s rights, refusing to give polluters our business, demonstrating against police violence, or even taking the leap to run for office ourselves,” she wrote.

“Everyday people running means more people of color, more women, more queer people, more first-generation Americans, more allies — more of the people whose voices have been missing for far too long. We may not have million dollar super PACs behind us, but we’ll have something more important — a shared mission uniting millions of people across this nation.”

Cuomo, who running for his third term, brushed off reports that Nixon could challenge him in the primary.

“In this business, you can’t let these things bother you, ” he said. “Otherwise you won’t last long.”

Cuomo reportedly has his own larger political aspirations, eyeing a run at the presidency in 2020.

He might be playing it cool, but there could be good reason for him to be concerned.

Four years ago he was challenged by relative unknown Zephyr Teachout, who managed to win 34 percent of the primary vote. Nixon’s name recognition and celebrity status could mean she has a real shot at unseating the incumbent.

If she does run, it will prove a fascinating test case between the more progressive and more moderate wings of the party. A similar situation is playing out in Illinois 3rd Congressional District, where “Blue Dog” Democrat Dan Lipinski, who opposes LGBTQ rights, women’s reproductive rights, the Affordable Care Act, and the DREAM Act, is being challenged in the primary by the more left leaning Marie Newman.