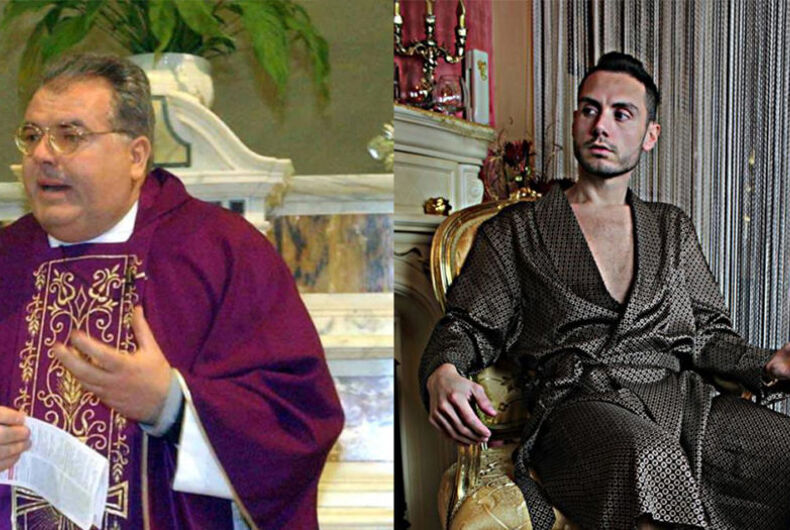 The Catholic church is reeling as dozens of allegedly gay priests have been exposed in a 1,200 page dossier prepared for the trial of Father Luca Morini in Italy on corruption charges.

Father Morini was exposed by male escort Francesco Mangiacapra. After misrepresenting himself as a judge, Morini’s lavish spending rang alarm bells for Mangiacapra once he discovered Morini was a parish priest instead.

Morini allegedly spent hundreds of thousands of Euros scammed from parishioners and potentially blackmailed from his superiors in the church according to the Church Militant. Morini’s parishioners dubbed him “Don Euro” for his profligate spending and worldly ways.

Mangiacapra tipped off the diocese about Morini’s crimes, but they weren’t taken seriously. After a local news show started investigating, however, the church suspended Morini “due to sickness,” bought him an expensive villa, hired him a maid and paid all of his costs. Morini reportedly blackmailed his bishop into the deal after threatening “to expose to the public eye unpleasant facts about many diocesan priests.”

The news episode focusing on Morini included footage of the priest snorting cocaine and having a good time with a group of male escorts. Other priests and parishioners tipped off the television show to Morini’s antics.

A police investigation found €700,000 in cash and €150,000 in diamond investments tied to the priest. Mangiacapra, however, says the sheer amount of corruption and double lives inside the Italian church hierarchy is just as important.

He provided a lengthy dossier to the archdiocese that included explicit allegations – including incriminating photographs and other documents – against 60 other priests.

“The goal isn’t to hurt the people I’ve mentioned [in the dossier], but to help them understand that their double life … isn’t useful to them or to the people who rely on them for guidance,” Mangiacapra told the newspaper Corriere della Sera.