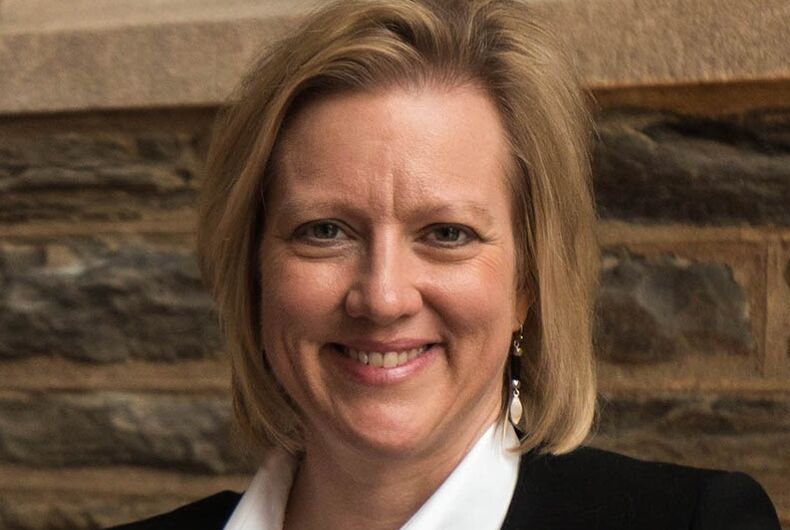 A Lutheran seminary in Philadelphia appointed a former conversion therapy activist as its president. Students and alumni are hurt and angry, not only that she got the job but that her past was hidden from them.

When the Board of Trustees at the United Lutheran Seminary (ULS) appointed Reverend Theresa Latini to the position of president, they kept quiet about her leadership in an organization devoted to conversion therapy.

After several weeks of heated debates, the chair of the board has resigned and apologized for her “lack of leadership” in the matter.

At issue is Latini’s work with the organization One by One, which she headed from 1996 to 2001. One by One, which still exists today, promotes conversion therapy and ex-gay ideology. Their website features “testimony” from people who claim to have “overcome same-sex attraction” and compares homosexuality to sexual abuse.

The organization gives help and resources to churches to run conversion therapy programs of their own and has a network of counselors and “safe” churches for LGBTQ people who can’t accept themselves.

When Latini was named president of ULS several weeks ago, students didn’t know about her work with One by One. But she has addressed the conflict at campus meetings since then.

In a blog post, Latini said that her views have changed. She said that she apologized to people she knew personally who were hurt by her work, and that she “committed [herself] to teaching, writing, and administrating from a position of support and advocacy for my LGBTQ+ students, colleagues, and others.” She did not describe what that involved in detail.

A letter sent to the Board of Trustees that was signed by 79 students said that they found Latini’s background “deeply hurtful.” They asked that the school acknowledge the “still-present and deep pain” the church has inflicted on LGBT people.

The students said that they wanted to meet with Latini to find out more about her past views, how they changed in the past two decades, and whether she did any “reparational acts” since her work with One by One.

In short, they wanted to know if she should be forgiven. Forgiveness is only appropriate after a process that involves an end to the hurtful actions, listening to the people who were hurt by them, an apology or an expression of regret, and making amends.

As seminarians, the ULS student body is undoubtedly interested in the process of forgiveness. The fact that the information was hidden from them may have led them to believe that Latini doesn’t really believe that her work for five years was wrong, and it’s not unreasonable that they want to hear more from her about what she has done since then to make amends.

Alumni also called out the Board of Trustees for hiding Latini’s past. A letter sent by Lutheran Students of Harvard Divinity School and the Union Theological Seminary – two graduate schools that ULS alums sometimes go to – said that their relationship with ULS has been “jeopardized by the past statements of President Latini and the recent, deceptive actions of the ULS board.”

The alumni, though, were not looking at forgiveness. They called conversion therapy “theologically and morally bankrupt, incredibly dangerous, and antithetical to the message of Jesus Christ,” and said that Latini’s past work “should have been disqualifying.”

The Board of Trustees announced that their Chairperson, Elise Brown, would be stepping down, that they will be undergoing professional training, and that “an expert in communal trauma and LGBTQIA+ issues” will be brought in.

Many people have changed their attitudes toward LGBTQ people over the last two decades, which means that many people in positions of power today said and did terrible things in the past.

The past shouldn’t be forgotten, but when can it be forgiven?

The trans folk who protested Pride have been sentenced, but was justice served?