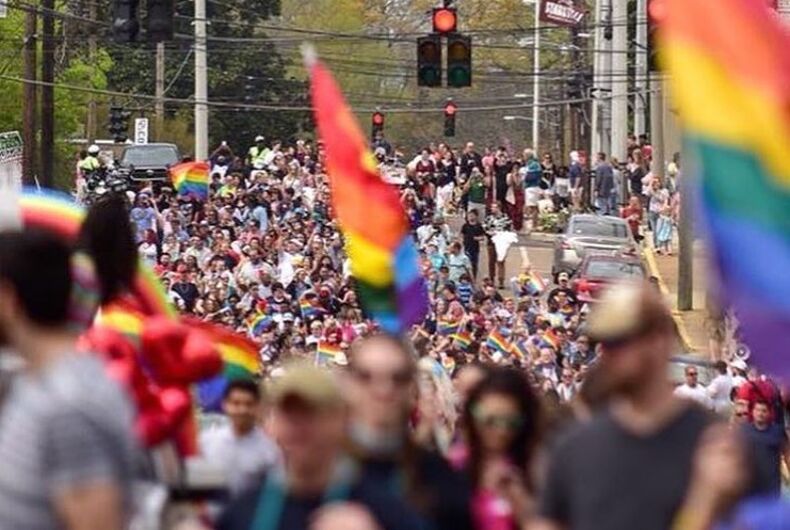 This past February, the town council of Starkville, Mississippi, voted 4-3 to reject a permit for an LGBTQ pride march.

The group Starkville Pride started taking legal action against the town of 25,000, and, several weeks later, another vote was held and the application was approved.

With almost 3000 people attending, Starkville Pride this past Saturday was the largest parade ever held in the town.

For the record this is the largest parade Starkville has ever seen. Here are some pictures to prove that. #StarkvillePride #LGBT pic.twitter.com/XxskZQhNBy

So happy this finally happened. You guys made it. The most conservative state in the US has made a step forward by celebrating his first gay pride outside of Jackson. Thanks to @wheresbailey and all the people who worked their asses off to win the battle. Wish i coulda been there, this means the world to us. You rock! #starkville #gaypride #mississippi #mississippistate #gayparade #gayrights #usa #southusa #starkvillepride #lgbtqcommunity #starkvillepridepersists

“I never expected to have this many people,” Mayor Lynn Spruill, who was supportive of Starkville Pride from the start, said. “This would never have happened if we didn’t have the controversy, so I’m almost grateful for the controversy in the sense it became something more than it ever would have been and it became something we can be very proud of, with no issues associated with it.”

I have a ton of “pride” in our @StarkvilleDaily team and our community. 👏👏👏 pic.twitter.com/49qWVZLtbq

The day started with a Queer Art Market in a park, which also served as the starting point for the parade. The marchers were led by organizers Bailey McDaniel and Emily Turner, who held a banner.

THE pride flag made by Gilbert Baker is Section 93 in the parade!! #StarkvillePride 🏳️‍🌈🏳️‍🌈🏳️‍🌈 pic.twitter.com/pklgbf7RZF

“Emily and I were there, and Emily’s parents came, marched in the parade, and after the parade they had ally buttons on and it just brought me to my knees,” McDaniel said. “Every other person in the parade has some kind of moment like that.”

“I feel like Starkville is so much better for this,” she added.

Of course, there were a few protestors at the event. The Starkville Daily News identified them as the Consuming Fire Fellowship, a Mississippi church that often protests in the street with outrageous signs. They’re like the Westboro Baptist Church’s little cousin.

“I’m thankful for Starkville Police, they were amazing,” she said. “We took a huge group photo after. Chief [Frank Nichols] was on our side.”

From getting denied by the BOA, to becoming Starkville’s biggest parade in history, Starkville pride persisted. The best day I could’ve ever asked for❤🧡💛💚💙💜💖 pic.twitter.com/75G5HkExqe

So proud to have witnessed Starkville’s first ever Pride Parade 🏳️‍🌈💕💜