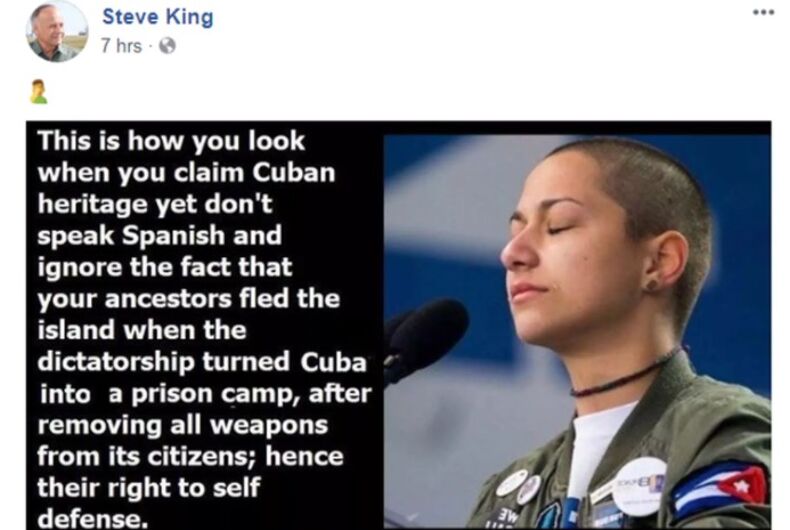 Conservatives aren’t happy that Americans are spoke out against gun violence this weekend.

So they’re getting personal in their attacks on the victims of gun violence.

During the March for Our Lives this Saturday, Parkland shooting survivor Emma Gonzalez took time for silence during her six minutes and 30 second speech demanding gun reform. Images of Gonzalez during the moment of silence were widely publicized, and they showed her wearing a Cuban flag on her shoulder (she is Cuban American).

This is how you look when you claim Cuban heritage yet don’t speak Spanish and ignore the fact that your ancestors fled the island when the dictatorship turned Cuba into a prison camp, after removing all weapons from its citizens; hence their right to self defense.

The meme is incorrect in several ways – guns aren’t banned in Cuba, Fidel Castro led an armed revolution against the government that involved citizens owning guns, Cuban heritage does not depend on speaking Spanish, etc. – but Facebook users were more shocked that King would attack her ethnicity instead of engaging her ideas.

“Are you SERIOUSLY mocking a school shooting survivor for her ethnic identity?!” Brandon Wolf, a survivor of the Pulse shooting, responded. “When it was my community, where were you? When it was Sandy Hook? Columbine? Were you on the sideline mocking those communities too? Did you question someone identifying as a mother? Did you question whether people like me were crisis actors?

A spokesperson for King said that the meme was “calling attention to the truth” that Cuba is a communist country with gun control laws, even though communism isn’t mentioned in the meme at all.

Yesterday, on CNN’s State of the Union, former Senator Rick Santorum (R-Pennsylvania) said that the students shouldn’t protesting. Instead, they should learn CPR.

“How about kids instead of looking to someone else to solve their problem, do something about maybe taking CPR classes or trying to deal with situations that when there is a violent shooter that you can actually respond to that,” he said.

So the students are to blame for gun deaths because they didn’t know CPR or how to stop someone with a gun.

#DisappointmentIn4Words You Should Learn CPR

The NRA has also attacked the teens, calling them little kids who shouldn’t be listened to.

In a post on Facebook, the NRA said that the Parkland survivors were being manipulated, as if there were no other explanation for their protests against gun violence.

“Today’s protests aren’t spontaneous,” the post said. “Gun-hating billionaires and Hollywood elites are manipulating and exploiting children as part of their plan to DESTROY the Second Amendment and strip us of our right to defend ourselves and our loved ones.”

In a video, NRA spokesperson Colion Noir said that the protest was a “carnival” and likened the organizers to little kids who draw with crayons.

“From where I’m standing, it looks like a march to burn the Constitution and rewrite the parts that they don’t like in crayon,” the ssaid.

If everyone was armed, then there wouldn’t be anymore shootings, Noir argued. But the protestors oppose that because they’re egomaniacs who love the “spotlight” and are trying to get out of their “homework.”