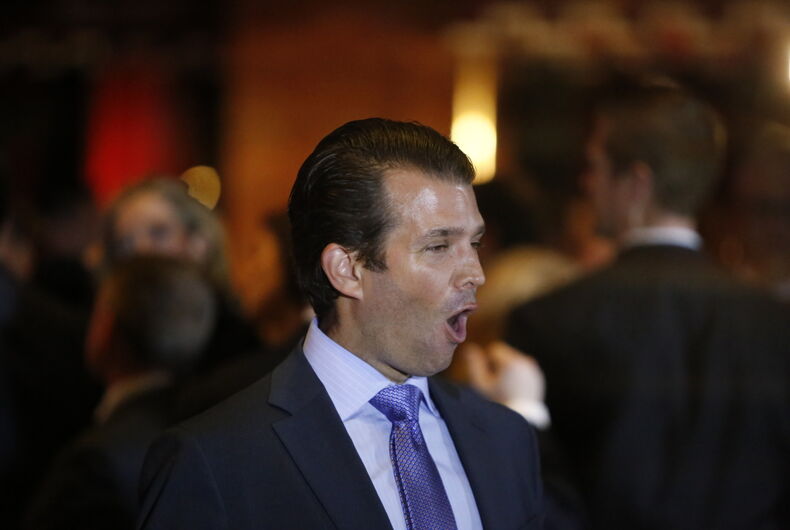 Donald Trump Jr. may have just bolstered the obstruction-of-justice case against his dad.

Trump Jr. took to Twitter on Thursday and to Fox News on Saturday to spin the House Republican memo that accused the FBI of bias in seeking one FISA warrant.

Trump’s eldest son tweeted that the FBI Deputy Director Andrew McCabe was actually fired. He then said the memo was personal revenge for his family and compared the Russian investigation to McCarthyism.

In tweets on Thursday, Trump Jr. tweeted that McCabe was fired, although McCabe reportedly resigned on his own on Jan. 29.

His tweet: “It was good enough to fire McCabe, no one argues its factually inaccurate, but now days later they want to protect the names of those involved in a scandal that was big enough to fire a senior official a month before retirement? They don’t deserve a pass on that!”

It was good enough to fire McCabe, no one argues its factually inaccurate, but now days later they want to protect the names of those involved in a scandal that was big enough to fire a senior official a month before retirement? They don’t deserve a pass on that!

Then, on Fox News on Saturday, Trump Jr. said he saw the memo as revenge against those investigating the president.

“There is a little bit of sweet revenge in it for me and certainly probably the family in a sense that if they wouldn’t have done this, this stuff would be going on,” Trump Jr. told host Jesse Watters, on Fox News’ “Watters World.”

“You see the Democratic senators… This is McCarthyism,” Trump said on the show.

Trump Jr.’s recollection of the McCarthy era differs from historical sources. After his re-election in 1952, the late Sen. Joseph McCarthy, R-Wisconsin, used little or no evidence to target “card-carrying communists” as he attacked people and ruined lives. His crusade ran parallel to the Lavender Scare, the 1950s witch hunt against LGBTQ people in the federal government.

Ironically, McCarthy’s chief counsel in the Senate and in his crusade was Roy Cohn, who eventually became a mentor to a young Donald Trump. Cohn died of AIDS in 1986.

Besides Trump Jr.’s claim that McCabe was fired, Trump reportedly asked Deputy Attorney General Rob Rosenstein whether he was “on his team” back in December.

Meanwhile, Special Prosecutor Robert Mueller continues the investigation into financial ties and contacts between the Trump campaign and Russian contacts that may have helped him win the 2016 presidency.

Former Trump campaign officials and staffers have turned state’s evidence. While legal experts vary on the potential evidence against Trump, two lawyers defending his associates said they expect an indictment against the president for obstruction of justice, a historic first.

When a teacher assaults a teen who won’t stand for the Pledge of Allegiance, it’s not ‘patriotism’

This transgender woman was discriminated against by Walgreens. She fought back & won.