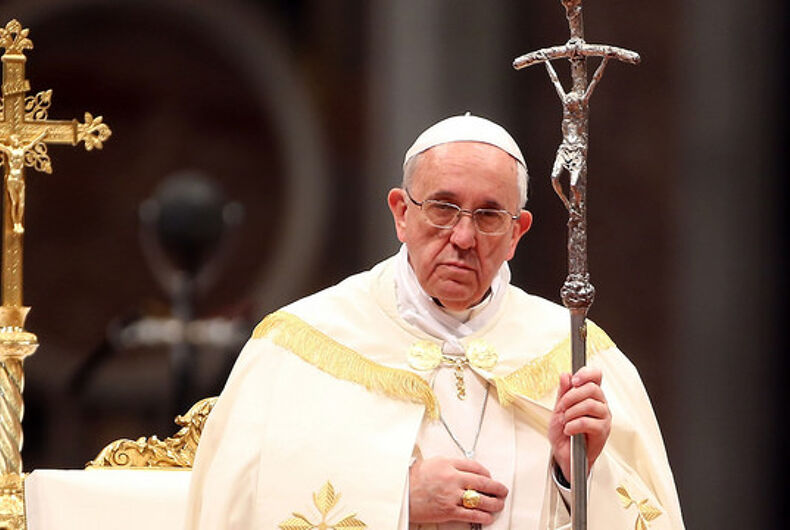 Pictures of same-sex couples and inclusive language have been removed from a booklet sent to parishes ahead of Pope Francis’s expected to visit to Ireland in August for the World Meeting of Families (WMF) in Dublin.

The informational booklet “Amoris: Let’s talk Family! Let’s be Family!” originally included five pictures of same-sex couples. All of them were removed by the WMF office in Dublin, along with language that, while still in opposition to same-sex marriage, gave recognition to same-sex relationships.

“While the Church upholds the ideal of marriage as a permanent commitment between a man and a woman, other unions exist which provide mutual support to the couple,” the now absent text read. “Pope Francis encourages us never to exclude but to accompany these couples also, with love, care and support.”

Pope Francis garnered headlines in 2013 for his comments when asked about gay people.

“If a person is gay and seeks God and has good will, who am I to judge?” he said.

He has, however, repeatedly reaffirmed his, and the church’s, view that marriage should only be between one man and one woman.

In 2016, he spoke in support of protesters against marriage equality in Mexico.

Two years previous, Pope Francis said the Catholic Church could potentially be persuaded into giving the okay to civil unions in order to provide certain rights, like that of property and healthcare access.

A promotional video from WMF Dublin describes the program, that utilizes the booklet along with other materials, as “a mixture of activities and conversations designed to help you reflect on the joys and challenges of family life today and what we mean by the gospel of the family.”

The change comes after criticism from Catholic website LifeSiteNews.

The publication, which is based in the United States, “reached out to Archbishop [Diarmuid] Martin, who is overseeing the World Meeting of Families, and asked if the homosexual image and text was inserted into the program by mistake.”

They did not receive a response, but many of those criticizing the change are pointing the finger at the publication.

The WMF office in Dublin has not given a reason for the change, instead offering a boilerplate response, claiming in a statement that the event had “always been understood as a meeting open to all. This remains the position of the World Meeting of Families in Dublin.”

Former Irish president Mary McAleese is among those criticizing the move, reports The Independent.

She pointed to “the history of the event” as evidence of reason to doubt that it is truly “open to all.”

“For example, LGBTI Catholics and their families who in good faith attended the 2015 meeting held in Philadelphia have reported that they experienced traumatizing hostility,” she said. “Ireland can and hopefully will do better than that.”

“How can LGBT families feel welcome when the very images of their existence are expunged from the literature as if they somehow contaminate it?” asked Catholic theologian Angela Hanley. “If you cannot be visible, can you be counted?”

The event is held every three years, to promote the message that family is “the cornerstone of our lives, of society and of the church.”