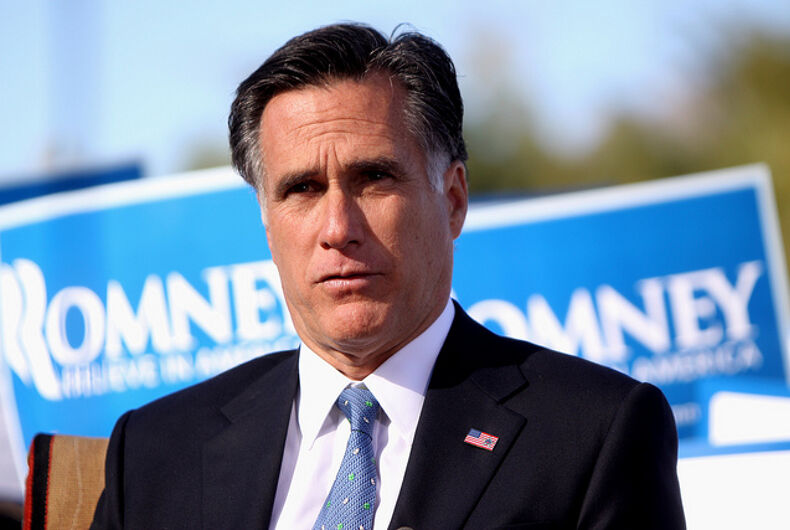 Mitt Romney announced today that he is running for Senate, hoping to take the seat currently held by the retiring Orrin Hatch in Utah.

I am running for United States Senate to serve the people of Utah and bring Utah's values to Washington. pic.twitter.com/TDkas6gD2p

He would have announced yesterday, but put off the announcement in the wake of the school shooting in Florida.

Romney, who signed up for a lifetime membership to the NRA in 2006, but also signed a permanent assault weapons ban while governor of Massachusetts, tweeted out that his “prayers go out” to the those left behind. He added that he wouldn’t make the announcement about the Senate “out of respect for the victims and their families.”

The Republican has a reputation as a flip-flopper, and LGBTQ rights are no different. Here is a handy list to keep in mind in case he starts up those happy mouth sounds about being a reasonable centrist who doesn’t have it out for us.

To hear Romney campaigning for Senate in 1994, you would have thought he was trying to win a Democratic primary to hear to talk about gay rights.

He told the LGBTQ magazine Bay Windows that he would be a better choice for the gay community than Democratic Sen. Ted Kennedy, despite Kennedy’s strong record on the issue. His campaign even passed out pink fliers at the pride parade, asserting the same claim.

But he supported constitutional amendments both on the state and federal level to ban marriage equality. He even bragged that he had kept Massachusetts from becoming the “Las Vegas of gay marriage.”

“I do not favor civil unions if they are identical to marriage other than by name,” he told a Denver Fox affiliate. “My view is the domestic partnership benefits, hospital visitation rights, and the like are appropriate but that the others are not.”

Romney has also come out against same-sex parenting.

He has said that “as a society, I think we’re better off if we encourage the establishment of homes with a mother and a father.”

Romney told conservatives in a 2006 speech that the ruling legalizing marriage equality in Massachusetts was harmful to families.

“Here in Massachusetts, activist judges struck a blow to the foundation of civilization — the family — they ruled that our constitution requires people of the same gender to marry,” he claimed.

“The principal burden of this court’s ruling doesn’t fall on adults, it falls on children,” he continued. “The price of same-sex marriage is paid by the children, our fight for marriage then should focus then on the needs of children, not the rights of adults.”

Romney said in 2007 that he didn’t think gay people should be able to serve openly in the military, defending the now repealed “don’t ask, don’t tell” policy.

Anderson Cooper confronted him during a Republican presidential primary debate, noting that he had said in 1994 that he looked forward to the day when gays and lesbians could serve “openly and honestly.”

“This isn’t that time,” Romney answered, when asked if he stood by that statement.

“Do you look forward to that, one day?” Cooper pressed.

Romney sidestepped and repeated that he didn’t feel this was the time to end “don’t ask, don’t tell.”

Romney told the Log Cabin Republicans that he would support the Employment Non-Discrimination Act (ENDA), and even look to expand it to include housing and credit.

Then, in 2007, while on Meet the Press, he said he would only support such legislation at the state level, signaling he no longer supported ENDA.

Romney got some praise for bringing openly gay Richard Grenell into his campaign as a foreign policy spokesman in 2012.

Grenell was out less than two weeks after being hired. Some say he was forced to resign because of his tendency to attack people, especially women, on superficial grounds on Twitter. Others say it was due to a backlash from social conservatives not too keen on a gay man being that close to Romney.

Grenell said in a statement at the time that while his sexuality “was a non-issue” for the Romney camp, he struggled in the face of a “hyperpartisan discussion of personal issues.”

He is currently up for an ambassador position in the Trump administration, but no one seems too eager to get him through the nomination process, aside from the Log Cabin Republicans.

Religious freedom is perhaps the biggest affront to LGBTQ rights the community is facing.

Romney has made clear that he stands on the side of those who want a license to discriminate based on their so-called “personally held beliefs.”

He has said “religious liberty” is “fundamental to America’s greatness” during a 2007 speech on his religious faith as a Mormon.

He added that “in recent years, the notion of the separation of church and state has been taken by some well beyond its original meaning. They seek to remove from the public domain any acknowledgment of God. Religion is seen as merely a private affair with no place in public life. It is as if they are intent on establishing a new religion in America – the religion of secularism. They are wrong.”

In 2012, while campaigning against Obama, he made clear that he was on the side of those who would wish to find loopholes out of offering protections.

“Religious liberty … [is the] first freedom of those enumerated in the Bill of Rights. And the president and his administration said they are going to usurp your religious freedom by demanding that you provide products to your employees, if you’re the Catholic Church, that violates your own conscience,” he said, of the healthcare legislation.

“And so whether it’s a Catholic businessperson or the Catholic Church itself they’re being told what they have to do that violates their religious conscience. That attack on religious freedom I think is a dangerous and unfortunate precedent,” he added.

“In our battle to preserve religious freedom and tolerance and freedom in this country, it is essential for us to push back against that,” he concluded.

He reiterated that stance in a 2012 op-ed for the Washington Examiner.

He pledged that, if elected, “on day one I will eliminate the Obama administration rule that compels religious institutions to violate the tenets of their own faith. Such rules don’t belong in the America that I believe in. The America I believe in is governed by the U.S. Constitution and I will not hesitate to use the powers of the presidency to protect religious liberty.”