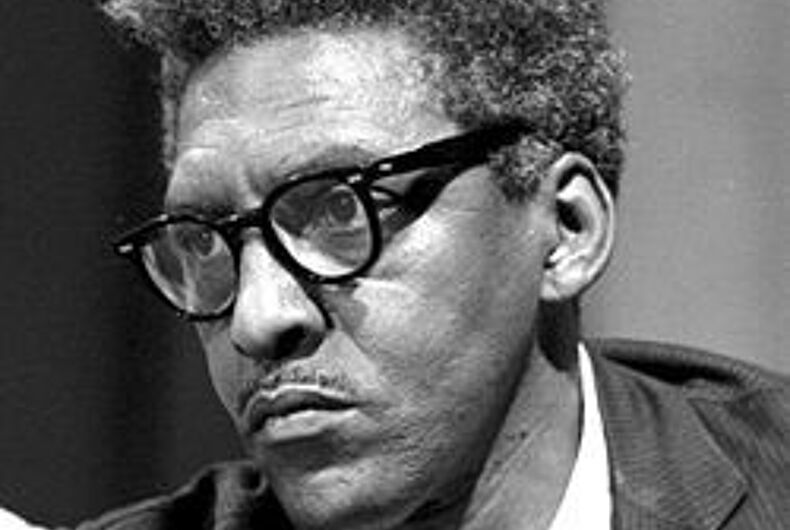 The 1963 March on Washington was a pivotal demonstration in the nation’s civil-rights history. It drew thousands of people to a peaceful protest of racial inequality and injustice.

Openly gay in an era far different from today, Rustin took his place among the march leaders on the cover of Life magazine a week later.

But his sexuality and other factors kept him from getting the recognition he deserved. In 2013, President Barack Obama awarded him the presidential medal of freedom posthumously, 50 years after the march.

Obama praised Rustin for his years of contributions. “As an openly gay African American, Mr. Rustin stood at the intersection of several of the fights for equal rights.”

As march organizer, Rustin had estimated 100,000 people would march, as thousands of police watched over them. “It will be the biggest rally in history,” Rustin had said. “It will show the Black community united as never before — united also with whites from labor and the churches, from all over the country.”

His eye for detail paid off. Rustin organized everything from food to restrooms. More than two and a half times the number he’d predicted — a quarter million people — marched peacefully that day.

Rustin devoted six decades of his life to the fight for equality: for civil rights and gay rights through nonviolent protest. He had met Martin Luther King Jr. in the 1950s, and he started working with him as a strategist in 1955.

But fellow leaders in the movement leaders took issue with his identity as a gay man. Rustin had been arrested on a morals charge in 1953. He’d been derided as a communist, a draft dodger and a gay man.

Yet he persisted, and in his final years, he became more involved in the struggle for gay rights, his surviving partner, Walter Naegle, said.

Before his death in 1987, Rustin reflected on his guiding principles. The New York Times included them in his obituary —

“The principal factors which influenced my life are 1) nonviolent tactics, 2) constitutional means, 3) democratic procedures, 4) respect for human personality, 5) a belief that all people are one.”