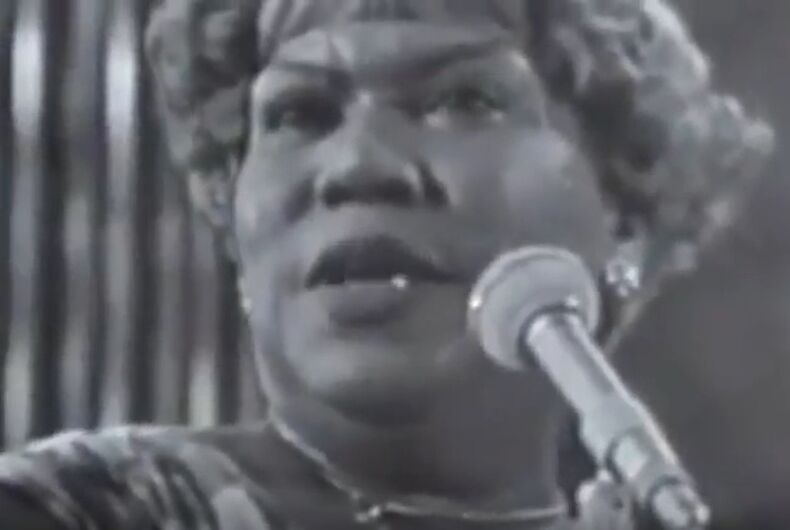 Revered as the Godmother of Rock ’n’ Roll, Tharpe was born to cotton pickers in Arkansas. By age 6, she performed in a traveling religious performances, a blend of sermon and gospel concert.

Her renown came as a dynamic performer, with a guitar style unseen before in a female performer, made even more distinctive as she blended gospel and secular music in nightclubs.

By age 23, she moved to New York, signed with Decca Records and recorded its first gospel songs, including the hit “Rock Me.” She became an overnight sensation, appearing at venues like Carnegie Hall and the Cotton Club.

Met with comments that she played guitar like a man, Tharpe replied, “Can’t no man play like me. I play better than a man.”

Need proof? Listen to to her 1960s recording of the hit “Up Above My Head.”

She married men three times, the final time to her manager, before 25,000 people in D.C.’s Griffith Stadium. But, back in 1946, Tharpe met singer Marie Knight. The two toured and performed as two queer black women, and “Up Above My Head” was their hit. They were also lovers, Tharpe biographer Gayle Wald confirmed in interviews with Tharpe’s contemporaries.

She was inducted posthumously in the Rock and Roll Hall of Fame in 2017. But Tharpe had recognized her influence on rock ’n’ roll in 1957, in an interview with the Daily Mirror: “All this new stuff they call rock ’n’ roll, why, I’ve been playing that for years now.”

Remembering the legacy of Bayard Rustin