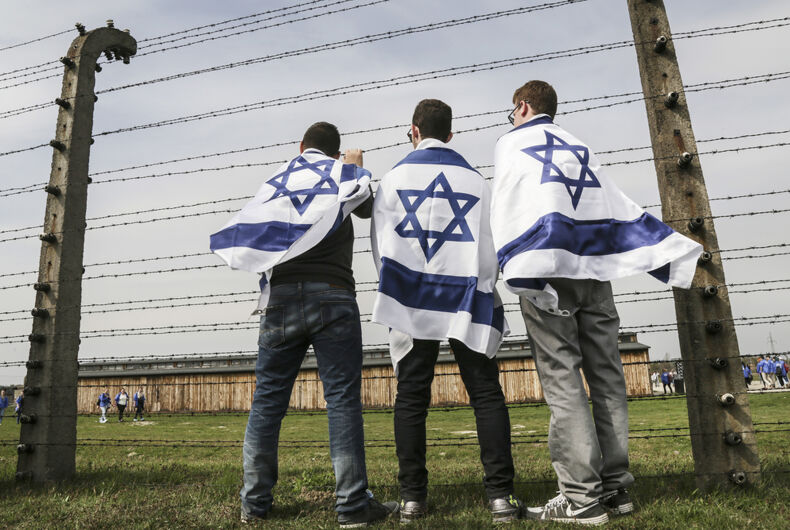 APRIL 16, 2015: People from the all the world meet for the March of the Living at the former Auschwitz-Birkenau Nazi concentration camp in Oswiecim Poland on Holocaust Remembrance Day.Photo: Shutterstock

The Polish Senate passed a controversial bill that is reverberating internationally. The bill will, by all indications, become the law of the land.

It states, in part, that “whoever accuses, publicly and against the facts, the Polish nation, or the Polish state, of being responsible or complicit in the Nazi crimes committed by the Third German Reich … shall be subject to a fine or a penalty of imprisonment of up to three years,” with the exception that a person “is not committing a crime if he or she commits such an act as part of artistic or scientific activities.”

What I find more surprising than the act itself is the blatant and unapologetic magnitude of this officially authorized perpetration of historical revisionism, something usually undertaken in a somewhat less official manner.

While mislabeling “Polish Concentration Camps” needs urgent correction as “Nazi or German Concentration Camps,” and though history records numerous instances of Polish Christians standing up against Nazi tyranny by entering the ranks of resistance movements and by sheltering Jews from certain murder, many others fully conspired with the Nazi invaders in their lands.

What happens in Poland circulates around and through my consciousness and my soul like blood circulates around and through my body. So when I watched and read accounts of Polish residents marching on their 99th annual Independence Day last year throughout the streets of Warsaw on November 11 with upwards of 60,000 people shouting chants and carrying Nazi and white supremacist paraphernalia, where some marchers called for a “white Europe” and an “Islamic Holocaust,” of course I was deeply concerned, but not particularly surprised.

The Foreign Minister from Poland’s rightwing so-called “Law and Justice Party” said  following the march that the day had been “a great celebration of Poles, differing in their views, but united around the common values of freedom and loyalty to an independent homeland.”

To be perfectly clear, the rising tide of fascism demonstrated in Poland represents a larger movement gaining hold throughout Europe and the United States. We have long since passed the point where it is merely hyperbole to compare the rise and control of the Nazis in the 1920s and 1930s to the rise and possible take-over of fascism throughout Western democracies and in some other countries around the world.

In both Nazi Germany and today, strong leaders whipped up dehumanizing stereotypes of groups they “othered,” resulting in the scapegoating of already-marginalized groups of people to blame for causing past problems and posing clear and present dangers to the state.

One day, when I was very young child in New York City, I sat upon my maternal grandfather Simon (Shimon) Mahler’s knee. Looking down urgently but with deep affection, he said to me through his distinctive Polish accent, “Varn, you are named after my father, your great-grandfather, Wolf Mahler. I lived in Krosno, Poland with my father, Wolf, and my mother, Bascha Trencher Mahler, and 13 brothers and sisters, and aunts, uncles, and cousins.”

Simon talked about our mishpocheh (family) with pride, but as he told me this, he revealed an obvious sadness on his face. I asked him if our family still lived in Poland, and he responded that his father and most of the remainder of his family were no longer alive.

When I asked him how they had died, he told me that they had all been killed by people called Nazis except his mother, Bascha, who died of a heart attack in 1934. I questioned him why the Nazis killed our family, and he responded, “Because they were Jews.” Those words have reverberated in my mind, haunting me ever since.