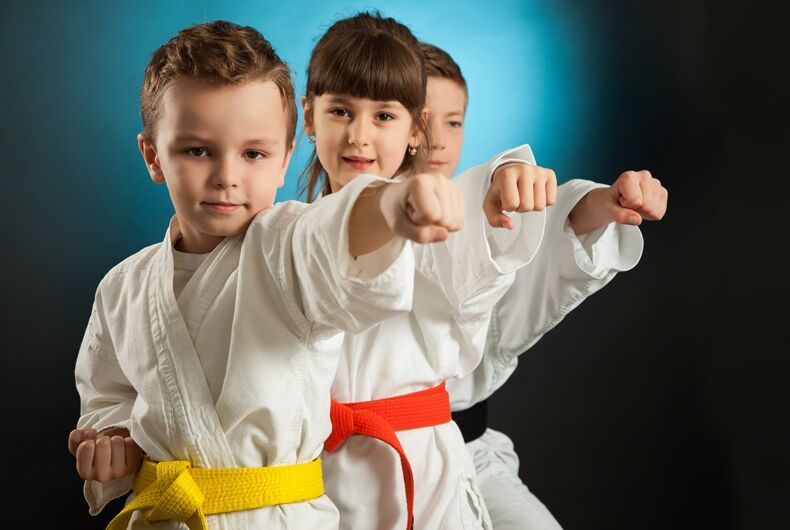 A martial arts instructor kicked a 6-year-old out of his class because the kid’s mother is married to another woman.

Jamie Trujillo, the mother, said that her ex-husband took their son to the Silent Thunder Martial Arts on a one-month free pass. According to KRQE News 13, a rock with “PRAISE GOD” painted on it sits outside Silent Thunder.

The next week, Jamie and her wife took the boy to a lesson and talked with the instructor, known as Master Mokurai, afterwards.

When Jamie introduced her wife, she said that Mokurai got angry.

“He said, ‘We’re a monastery. We worship God here. That goes against what God teaches.’ And then he looked at my son, addressed him by name and told him, ‘What your mother is doing is wrong,’” she said.

“It actually took us a few minutes to realize that he wasn’t joking,” she added.

The moms tried to argue with him, but of course that went badly. Mokurai kicked the whole family out.

New Mexico’s anti-discrimination law bans discrimination on the basis of sexual orientation in public accommodations, so what the martial arts school did is probably illegal.

This story shows why those cases about anti-LGBTQ bakers are so important. Those business owners are asking for the definition of “artist” to apply to any job that requires creativity, which a lot of jobs do. And they argue that the state’s interest in fighting discrimination in the public sphere is never as important as a religious person’s right to do whatever they want.

Here, the instructor has cited four different religions and is working at a business with the word “arts” right in the name, a business that he refers to as a “monastery.” It might seem silly now to say that he’s allowed to discriminate against the kid of a lesbian couple, but it might not look so outlandish after a few more rulings in favor of religious exemptions

Online racists attack a ‘Drag Race’ queen with the n-word