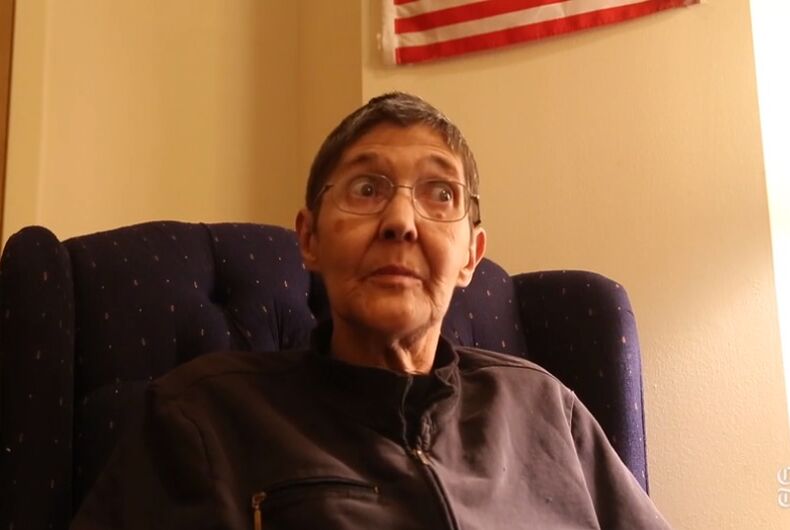 Marsha Wetzel, 70, is suing her senior living home for failing to protect her from the verbal and physical attacks from other residents because she is an out lesbian, and the ruling could set a precedent.

Wetzel has said she barricades herself in her room at night while she is sleeping, because she doesn’t feel safe while her guard is down. She has reportedly skipped meals, or taken them in her room, to avoid potential conflicts.

She has allegedly been targeted by other seniors who also live at Glen St. Andrew Living Community in Niles, Illinois, a suburb of Chicago.

Judges in the 7th U.S. Court of Appeals in Chicago heard oral arguments on Tuesday, a year after a lower court judge ruled against Wetzel, claiming she had failed to show staff displayed “any discriminatory animus, motive or intent,” reports the Associated Press.

The three-judge panel heard from her lawyers that after moving into the home, following the death of her partner of 30 years, in 2013, was told by one resident that “homosexuals will burn in hell,” and was had her walker rammed into with a scooter by another. That incident resulted in Wetzel falling over and bruising her arm, her lawyers claimed.

One of the attorneys representing her, Karen Loewy of Lambda Legal, noted that if the court chooses to send the matter back to district court it could set legal precedent by explicitly stating that sexual orientation must be protected, as a form of sex discrimination, under the Fair Housing Act.

The Fair Housing Act prevents discrimination in the rental and purchasing of housing on the basis of race, color, national origin, religion, sex, disability, or the presence of children.

Lisa Hausten, a lawyer for the owner of the facility, said the harassment was nothing more than “on-going squabbles with an older male resident and a couple of isolated incidents with two elderly females.”

She added that “quarrels with her fellow seniors, regardless of how cranky or offensive their words, are not sufficient to maintain an action under the Fair Housing Act.”

Wetzel and her legal representatives dispute that portrayal.

Finally, opposing counsel attempted to make reference to “elderly people,” only to be stopped by Judge Wood, who cited some (truly) “unfortunate language” in their brief used to characterize such people.

“I felt completely scared and helpless when the people in charge at Glen St. Andrew would not protect me, but the idea that they don’t think they have to protect anyone is shocking,” Wetzel said in a statement. “The elderly deserve to be treated with respect and to feel safe no matter who they are or who they loved and I’m going to fight for us.”

“I don’t see any case cited where a landlord is held liable for tenant-on-tenant harassment,” said Judge David Hamilton. He added that he was concerned that it would be difficult for a landlord to ascertain who was the abuser and who was the abused.

Lowey said that no one was arguing that a landlord must step in on every minor dispute, but rather that they are obliged to become involved when the issue is one of “severe or pervasive harassment” like in her client’s case. In those situations, a tenant’s rights are being fundamentally undermined, she argued.

Judge Diane Wood, whom the AP described as sounding sympathetic to Wetzel’s lawyer’s arguments, noted that no one was saying the facility “applauded” the abuse, but that they “shrugged their shoulders” as it was occurring.

Wood also made an analogy to sexual harassment liability at work, noting that if employers are aware of such a situation and choose not to take action, they can be held liable.

Both Wood and Hamilton are Clinton appointees, while the third judge, Michael Kanne, who spoke only briefly, was appointed by George W. Bush.

Their ruling is expected sometime in the next few months.