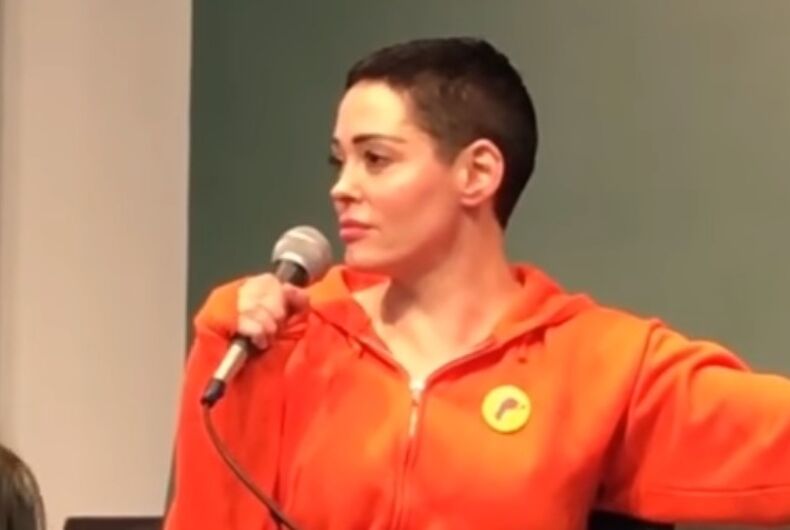 Rose McGowan during a confrontation with a trans activistPhoto: Screenshot

Chances are you’ve heard about the incident between Rose McGowan and a transgender activist who yelled at her during a book reading over comments she made while on made on RuPaul’s “What’s The Tee?” podcast:

“They assume because they felt like a woman on the inside. That’s not developing as a woman. That’s not growing as a woman, that’s not living in this world as a woman and a lot of the stuff I hear trans complaining about, yeah, “Welcome to the world.”

But here’s the ICYMI, tl;dr version: Trans activist Andi Dier called out McGowan’s comments, McGowan shouted back, then alleged (without evidence, and with none forthcoming) that she was likely a paid plant from the Harvey Weinstein camp, and promptly cancelled her upcoming events, and, finally, Dier is now being accused by several women of sexual misconduct when they were minors.

It is easy to yell at someone. Sometimes they even deserve it. In some cases, especially when done in groups and leveled against an indifferent system and powerful institutions, it makes a real difference.

ACT UP illustrates this perfectly. Without their anything-but-polite tactics the height of the AIDS epidemic would have dragged on even longer, with more lives lost.

But call-out culture has now made what used to be a powerful nuclear option the default play. As a result, the effects are beginning to wear thin. The constant noise, online and increasingly offline as well, is becoming more a dissonant hum of white noise than a powerful explosion that forces all to take note and hear the message.

Calling out McGowan for problematic comments is all well and good. There is undoubtedly an all too real epidemic of anti-trans violence that deserves to be screamed about from the rooftops, and even in bookstores.

It’s certainly fair enough to say that no one is immune. But the defensive response, the lack of true dialogue, and the complete shutdown by McGowan, while unfortunate, is also not surprising. If you want to change a mind, starting the conversation with shaming and yelling is your worst option.

If your true goal is to get attention to an issue, call outs have their place. A quieter conversation in the corner after the reading, if even possible, wouldn’t have resulted in the media attention that followed.

Yet we’re talking more about the blowup and the flaws of individuals than we are the issue at hand, the message Dier wished to call out: Transgender women are women, who face as much, if not more, violence than cisgender women.

The media’s fixation with her in particular does not seem motivated by a serious concern for the issue of systemic gender inequality and sexual harassment, much less the relationship of trans issues to intersectional feminism, but rather yet another instance of a preference for distracting spectacle.

Defensiveness is not a good look

McGowan was given an opportunity, albeit one that came in the form of vociferous criticism.

She could have listened to that criticism. She could have take it on board and admitted that her words were possibly harmful, and that she has room to grow.

Instead, she struck back, hurled accusations, and then decided she would no longer make those sorts of public appearances.

While she is not obligated to continue her press tour, the response makes her look even more walled off from any interest in a conversation that we all need to be having.

It is the message, not the messenger that should reign supreme.

Those who were just #RoseArmy 100 percent probably couldn’t hear her words on trans people without bias, and, like she should do, admit that they were troubling.

Those who were cheering on Dier as a trans woman who had the bravery to speak out against erasure, as well as sexual assault and violence, must now grapple with the allegations against her.

Multiple women have accused her of sexual misconduct when she was in her late teens and early twenties (before she transitioned), while they ranged in age from 12 to 15.

Dier, much like McGowan, claimed the accusations were a plot against her, by trans exclusionary radical feminists, McGowan supporters, and the alt-right. That is called into question by the fact that there are tweets making these allegations dating all the way back to 2010.

Whether it’s resultant from the cult of personality, or from strict adherence to identity politics, following the individual over the idea will lead you astray.

In both cases, one would be led astray if they put their faith in the individual. But in both cases, the messages, when removed from their messengers, are important and need to be heard: Society must do more to protect and respect women – cis and trans.