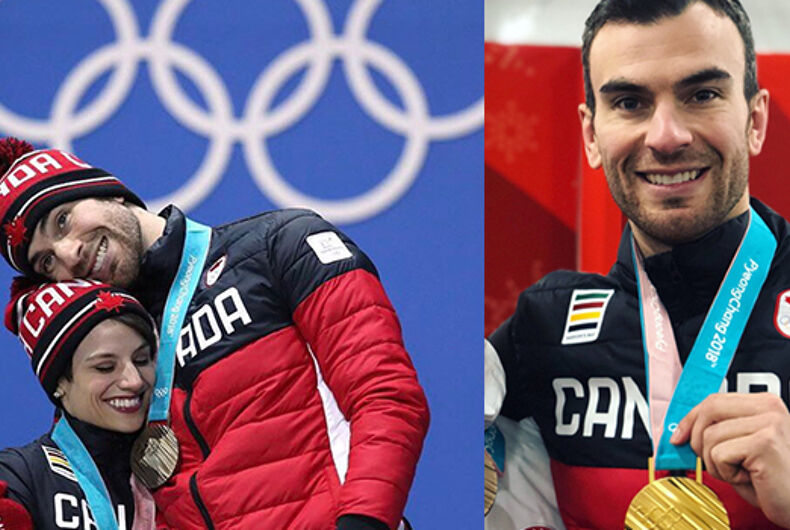 Eric Radford became the first openly gay man to win a gold medal at the Winter Olympics on Sunday, with partner Meagan Duhamel in the team figure skating event. After winning another medal with Duhamel, this time a bronze in free skating, the pair announced their retirement.

“They will skate straight into retirement and pro tours, eschewing the world championships and all the practice that event would entail,” reports the National Post.

Not only did Radford make Olympic history, the pair did as well with the first successful quad throw.

“We saved the best for last,” Radford said.

“We don’t ever have to do a quad throw again,” Duhamel said. “We landed the last quad we tried. That makes me happy.”

In addition to their two Olympic medals, the pair have two world championship golds, a Grand Prix final title, and seven national championships.

Radford shared a photo of himself and Duhamel together on the ice, holding a Canadian flag, with a caption thanking the fans for their support, and including #outathlete and a pride flag emoji.

I couldn’t ask for more in my career. It’s been fun dreaming my wildest dreams and having so many of them come true. Thank you everybody for all of your support. #bronzemedal #Olympics #pyeongchang2018 #figureskating #figureskater #TeamCanada #proud #outathlete #💪🏻🏳️‍🌈

Radford shared on Twitter “it feels good to know that maybe, I’ve already made a difference.”

Probably the closest to “Happily Ever After” I will ever get. #Olympics #soulmate #thankyou #unforgettable #figureskating #theperfectending pic.twitter.com/J70nRWv67w

Radford reflected on the impact he is having in an interview with Toronto Metro.

“I have had some really touching messages from people who are still in the closet, and they said that I’ve really inspired them, and helped them to try to accept themselves more…that’s incredible,” Radford said.

“I look at my own story. When I was a kid in a small town growing up, figure skater, hockey town, it sucked. It was hard. And not only not being accepted by other people, but there was a long time where I didn’t accept myself. And I think that I just look at that, and if I had someone like that to look up to it would have been easier. And that’s what I want to be to other people,” he added.

He noted that his favorite letter was from a mother living in his hometown who said her daughter came out to her, and thanking him for setting a good example.

Adam Rippon, who won bronze for Team USA and has another chance to medal tonight, has also said that he is inspired by the letters he is receiving.

“I’ve got so many messages from kids all over the country — I’m getting so emotional thinking about it — I think that’s why it’s so important. I think as an athlete I use this platform to my advantage. I think it’s giving my skating a greater purpose,” he said.

When it comes to mass shootings, the problem isn’t Republicans or the NRA. It’s you.