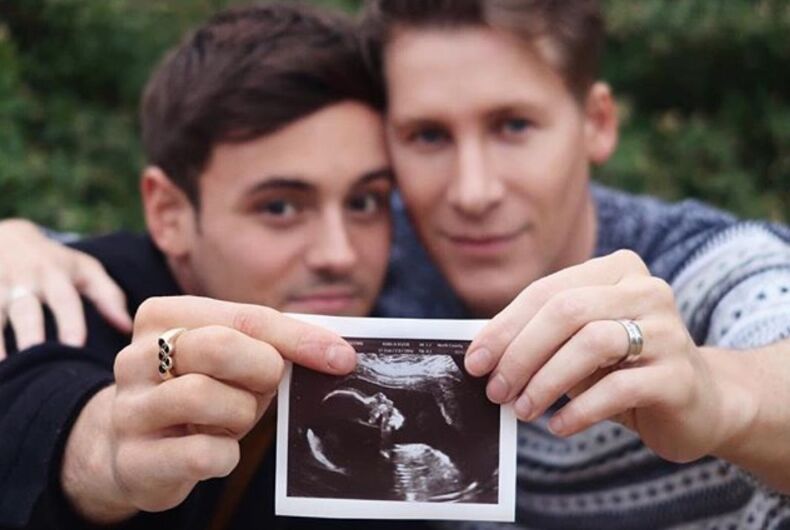 Tom Daley and Dustin Lance Black pose together with a sonogram of their babyPhoto: Instagram/Daley

On Wednesday, film-maker Dustin Lance Black and his husband, Olympic diver Tom Daley, announced that they were having a baby.

The right responded with outrage

He asked why they needed to share their ultrasound image (as if they were the first expectant parents to share an ultrasound online) and compared it to “a picture of my last colonoscopy.”

Littlejohn also called the baby a “publicity stunt” and a “fashion accessory,” said that the dads-to-be were treating the surrogate mother like a “breeding machine,” and summarized his reaction with “Pass the sick bag.”

His column has resulted in two advertisers nixing their ads in the Daily Mail.

LBC, a radio station, asked if there was something “sinister” in the childbirth, a question it’s hard to imagine anyone asking about straight parents.

Anti-transgender activist Julie Bindel also expressed her disgust at the dads’ “selfish” decision and linked an article about surrogate mothers in India.

No-one has the 'right' to their own biological child. And renting the womb of a desperate women to fulfil a selfish desire is a human rights violation. Surrogacy is the interface between extreme capitalism and patriarchy. Leftists that support Tom Daley et all in doing this need

to have a think about the systems of oppression they are propping up: https://t.co/JarLF7hmed

There is no evidence that the surrogate mother Black and Daley hired is in India or is “desperate.” Bindel didn’t explain how “systems of oppression” are unique to surrogacy and not propped up by pretty much everything wealthy nations import from countries like India.

But the main point seems to be calling a gay couple “selfish,” so mission accomplished.

Prominent Trump supporter and Islamophobe Marilena Rossi also called the couple “selfish” for having a child who will be “motherless.”

This is the selfish regressive Left. To intentionally decide to leave a child motherless is not cool #TomDaley. And we women are not ovens.#surrogacy https://t.co/5sVU99Nyvy

Black just had a short response to the media hatred, focusing on “strength and love.”

My reaction to others’ hate, bigotry & misinformation will not include anger or hate. For me, the path forward is lit with curiosity, listening, correcting the record when possible, and as best I can, leading with an example of strength & love. pic.twitter.com/lJ9pGn8stM