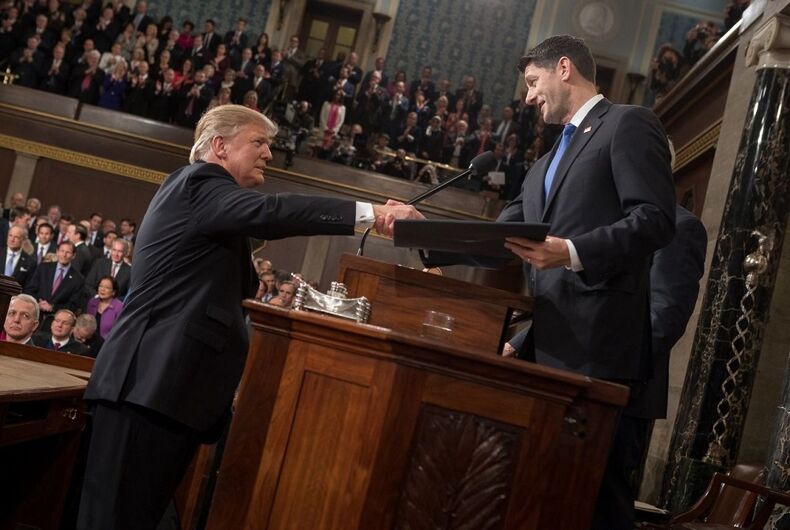 Photo: Wikimedia Commons/Office of the Speaker

Political pundits – former and current Republicans such as Joe Scarborough, Nicole Wallace, Bill Kristol, and Michael Steele, for example – have been calling for Speaker of the House, Paul Ryan, to grow a spine and show some moral courage by standing up to Donald Trump in what they see as Trump’s assault on the institutions holding together our democracy. These Republican pundits and operatives have expressed serious disappointment in what they perceive as Ryan’s immense potential for reasoned, intelligent, and courageous leadership, which he has surrendered in serving as Trump’s willful stooge.

The framers of our elegant Constitution feared a monarchy like those in Britain and other European countries. Therefore, they set out to establish a form of government “of the people, by the people, and for the people,” with a clear separation of powers balanced between the co-equal executive, legislative, and judicial branches, in which no one branch would disrupt that delicate and precise balance.

What these framers may not have fully anticipated, though, was the reality of two or all three branches growing together into one all-consuming uber-organism conspiring to dismantle the very institutions responsible for maintaining and perpetuating the Republic.

They may not have imagined an inept and erratic executive with the virtual backing of the majority of the legislature calling into question the autonomy and judgment of judges based on their ethnicity, attacking the judiciary when it hands down rulings opposing executive actions, and packing the bench with appointees confirmed by the Senate willing to do its bidding.

They may not have imagined two or all three branches marching in lockstep to undermine the rule of law in its concerted effort to dismantle the Department of Justice and its national security and intelligence agencies and place them under the total control of the executive, while also reducing the authority and functioning of other major departments.

Though the free press serves as our virtual fourth branch working to keep the official three honest and transparent, the executive with his legislative comrades continually assault and threaten the First Amendment’s “free speech” clause by going after the media, while chief political strategist Sean Hannity of Fox News, the official state media outlet, blares phony conspiracy theories perpetrated to sway public opinion further to the far right of the spectrum to advance the policies of Czar Donald the Tremendous.

And Paul Ryan, one of Trump’s primary puppet masters, pulls the “neoliberal” strings to turn Trump to fully face a market-driven approach to economic and social policy, including such views as reducing the size of the national government and granting more control to state and local governments; severely reducing or ending governmental regulations over the private sector; privatizing governmental services, industries, and institutions including education, health care, and social welfare; permanently incorporating across-the-board non-progressive marginal federal and state tax rates; and possibly most importantly, ensuring market driven and unfettered “free market” economics.

One need simply look at Trump and Ryan’s attempts to eliminate the Affordable Care Act; to severely curtail environmental regulations on industry and, for example, the Dodd-Frank legislation passed to reduce the chances in the banking sector of repeating the disastrous policies leading to the last economic recession; to push for the privatization of social institutions such as education with the confirmation of Betsy DeVos as Secretary of the Department of Education; to pass the draconian so-called “tax reform” law and a national budget that places billions more dollars into the pockets of the rich and super rich, while imposing increasingly greater hardships on the remainder of our people by taking away many of the safety nets and programs needed by deserving U.S.-Americans and countries in the form of aid, slashing agency budgets and staffing, and placing greater emphasis on militarism than on diplomacy.

Ryan said in 2012, “Right now about 60% of the American people get more benefits in dollar value from the federal government than they pay back in taxes. So we’re going to a majority of takers versus makers in America and that will be tough to come back from that. They’ll be dependent on the government for their livelihoods [rather] than themselves.”

Paul Ryan blamed men “in the inner city” on their “real culture problem” for their higher rates of unemployment during his appearance March 12, 2014 on Bill Bennett’s “Morning in America” program: “We have got this tailspin of culture, in our inner cities in particular, of men not working and just generations of men not even thinking about working or learning the value and the culture of work, and so there is a real culture problem here that has to be dealt with.”

Social conservatives and Libertarians like Ryan would rather blame poverty within our communities and low achievement in our schools on the “cultures” of those suffering from larger social inequities. This “cultural deficit model” detracts and undermines us from interrogating and truly addressing the enormous structural inequities pervasive throughout our society, which these “Libertarians” would have us multiply if we were to follow their lead.

Ryan, who demanded “personal family time” as a major condition for taking over the House Speakership, consistently opposes legislation that would extend paid family leave benefits for new parents. For example, in 2009, he voted against the proposed Federal Employees Paid Parental Act.

The next red meat on Ryan’s chopping block includes the government programs of Medicare, Medicaid, and Social Security. Paul Ryan will finally fulfill his life-long libertarian pipe dream of dismantling any remaining remnants of The New Deal and The Great Society within the so-called “deep state.”

The group calling itself Nuns on the Bus, a project of NETWORK Education Program, which was founded in 1971 by Catholic sisters, advocates for social justice issues, registers voters, and lobbies legislators on Capitol Hill. Nuns on the Bus conducted several tours: the first traveling between Iowa through the Midwest, and terminating in Washington, D.C. in summer 2012 to protest the Republican budget plan devised by Paul Ryan.

The budget for Fiscal Year 2015 introduced by Rep. Paul Ryan (R-WI), like his Fiscal Year (FY) 2014 and 2013 budgets, proposes deep funding cuts that would devastate programs especially important to women and their families: Medicaid, Medicare, the Affordable Care Act, child care, education, SNAP, and much more…. The overwhelming majority of the cuts proposed in the Ryan budget – $3.3 trillion – comes from programs for individuals and families with low or moderate incomes, meaning women and children bear the brunt of the cuts. At the same time, the budget proposes trillions of dollars in new tax cuts for the wealthiest Americans and large corporations and decreases employment by an estimated 1.1 million jobs in FY 2015 alone.

The Republican political pundits and operatives who are hoping that Paul Ryan will grow a spine and stand up to Donald Trump fail to understand that the reverse holds true: Donald Trump is actually the stooge of Paul Ryan and of all the other so-called “libertarians” and “social conservatives” who live by the mantra attributed to Thomas Jefferson that “Government is best which governs least.”

Unfortunately, Jefferson likely never imagined the extremes to which many of them, including Ryan, would take it by attempting to affect their corollary as “Government is best which governs not at all.”

Why it’s not ‘LGBTK’: What the word ‘LGBT’ means

Kentucky state police tweeted a rape joke during the Superbowl