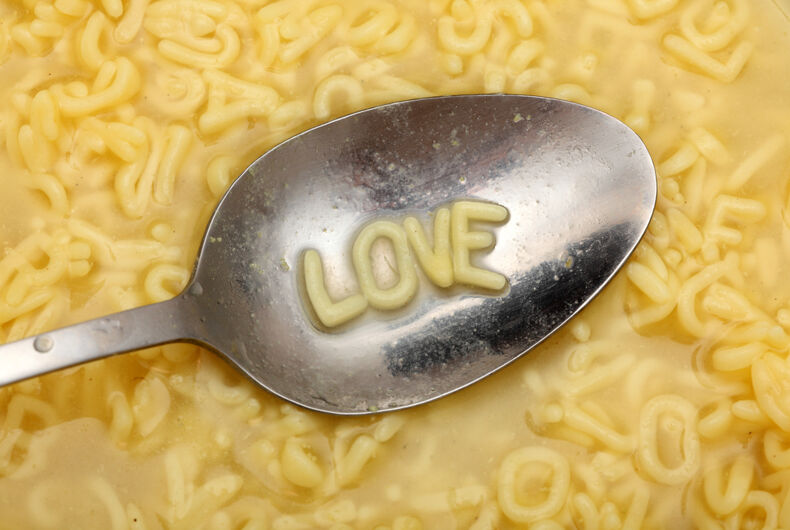 Alexander Kacala had an interesting post on Hornet this week about the rarely-used “K” in “LGBTQIAPK+.”

MTV’s website has a page that “explains” the letters that says that K can be used to mean “kink.”

Now, while whoever wrote that page for MTV probably had the best of intentions, I would not include that letter in the alphabet soup. Kacala found an online discussion with a lot of people saying the same thing.

But why draw the line there and not somewhere else?

The issue is that “LGBT” is a deceptive term. It looks like it’s a bunch of different groups of people who may or may not have anything in common being thrown together, but it’s actually describing a single idea.

Instead, “LGBT” can be thought of as a single word, and “LGBTQ,” “LGBT+,” and “GLBT” are common variants of that word.

This word LGBT refers to people whose fundamental identities cause them to live their lives in ways that are significantly incompatible with the expectations associated with the gender assigned to them at birth.

Under this interpretation of LGBT, the word’s origin is the abbreviation for “lesbian, gay, bisexual, and transgender.” But its use is that of a four-syllable word that refers to one group of people.

Note that my definition has the word “significantly” in it, by which I mean that the incompatibility makes someone so uncomfortable that they choose to give up the privilege that comes with being seen straight and cis.

For example, a cis/straight man might wear a pink shirt one day, which, in some places, would defy a male gender expectation. But does that defiance come from a fundamental part of his identity? Would he keep wearing that shirt if he faced real discrimination and harassment? Probably not, so “cis/straight men who wear pink shirts” are not part of LGBT.

So gender non-conformity has to be significant and a fundamental part of one’s identity to be LGBT.

This understanding explains why L, G, B, and T appear together so often: people see these struggles as fundamentally about the same thing. We’re not just groups of people who randomly found our demographics in the same abbreviation.

No, we’re all people who were told that we would be women or men one day, who learned that women and men can do lots of different things but certain things can only be done by men or by women, who face discrimination and violence because the entire way we live our lives disproves this oversimplified understanding of gender, and who persist in living our lives as authentically as we can because doing otherwise causes stress that’s even worse than the oppression we face.

So this is why some letters can be added to LGBT without raising eyebrows, like A for asexual and I for intersex.

On the other hand, K for kink doesn’t work – straight, cis people can be kinky without necessarily living lives that challenge fundamental aspects of being a real man or a real woman.

This isn’t to say that kinky people don’t face discrimination – they often do.

But lots of groups face discrimination – racial minorities, minority religions, immigrants… – and they aren’t part of LGBT because those forms of discrimination don’t come from shaking the structure of the gender binary.

For example, I’m a Hispanic gay man, but I don’t think that being Hispanic is what makes me a part of the LGBT population. “LGBTH” wouldn’t make sense.

Or: Donald Trump is reportedly into some kinky practices, but no one would call him queer or feminine because of those kinks.

Anyway, the letters after LGBT change depending on the context, and that’s fine. They should. It’s a living language. (I know I’m writing all this under a banner that says “LGBTQ.”)

But there’s a reason that LGBT often appears on its own: it has a meaning that’s bigger than the sum of its letters.

Anthony Rapp: ‘I was trying to protect people’ with the Kevin Spacey allegations

Donald Trump & Paul Ryan: Who Is the Stooge?