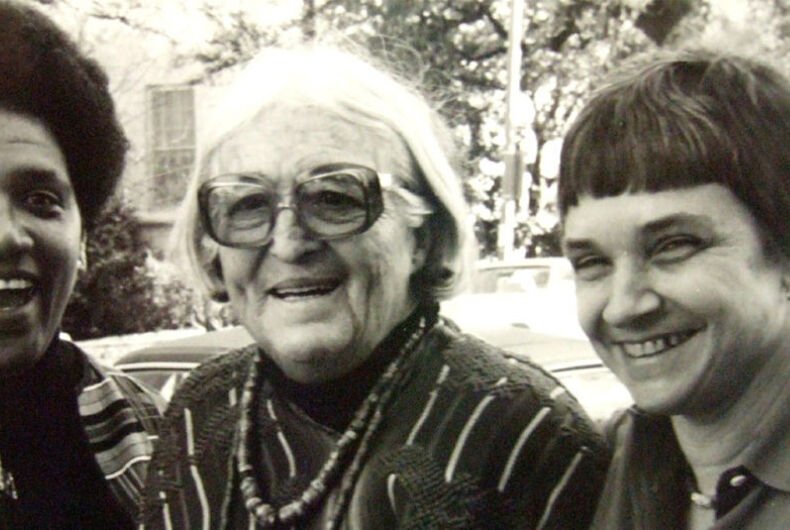 What woman here is so enamored of her own oppression that she cannot see her heelprint upon another woman’s face? What woman’s terms of oppression have become precious and necessary to her as a ticket into the fold of the righteous, away from the cold winds of self-scrutiny?

~ Audre Lorde, “The Uses of Anger”

On January 20, hundreds of thousands once again took to the streets around the nation for the Women’s March on the one year anniversary of the original event that coincided with President Donald Trump’s inauguration.

And just like in 2017, there have been charges that the march, and the movement it represents, is not inclusive enough. Much of the imagery of the signs, as well as the infamous pussy hats, have been criticized for being inherently trans-exclusive.

Others have noted that white women as a voting bloc supported Donald Trump in the 2016 presidential election, based on exit polling.

Supporters of the march pushed back, arguing that the women marching almost certainly didn’t vote for Trump. There was also an effort this year by organizers to try to make it a more welcoming place for all to have their voices heard in opposition to this administration’s attacks on women and other minority groups.

Others are arguing that it was inclusive enough already, and if you don’t like it, too bad.

A photograph of a woman with a trans exclusionary feminist sign went viral as the perfect embodiment of what critics have been saying.

TERF here is one example at the Women’s March pic.twitter.com/eQvp3jVMPw

The debate will likely rage on for as long as these events are held — and it seems at this point, with the birth of the Me Too and Time’s Up movement(s), that it could outlive the Trump presidency.

What the more casual observers might not realize is that this is a decades old debate, and anyone who wishes to better understand it would do well to learn a bit about Audre Lorde, who was born on this day in 1934, and who passed away on Nov. 17, 1992.

Lorde was a queer African American civil rights activist, poet, feminist, and womanist, and to name but a few identities, who shook up the movements with which she was involved by promoting the concept of intersectionality well before the term was coined by Kimberlé Crenshaw in 1989.

She understood that vulnerable groups experience discrimination, often at the hands of the same oppressors, for the same fundamental reason: fear of difference.

It is a concept she explored in an essay titled “There Is No Hierarchy of Oppressions”:

As a black, lesbian, feminist, socialist, mother of two including one boy and a member of an interracial couple, I usually find myself part of some group in which the majority defines me as deviant, inferior, or just plain “wrong.”

“Oh,” says a voice from the Black community, “but being Black is NORMAL!” Well, I and many Black people of my age can remember grimly the days when it didn’t used to be!…

And it is a standard of right-wing cynicism to encourage members of oppressed groups to act against each other, and so long as we are divided because of our particular identities we cannot join together in political action.

Conservatives have pitted Dreamers against CHIP recipients, low income workers against immigrants, cisgender women against trans and gender nonconforming women. And the list goes on.

“She was able to connect the dots of history to what we are living today,” poet and civil rights activist Sonia Sanchez, who wrote the introduction for the recent reissue of Lorde’s A Burst of Light and Other Essays, told NBC in a recent interview of Lorde.

It is no wonder her quotes still end up on protest signs, appear as Facebook statuses and tweets, and are spoken from stages and through bullhorns.

Just listen to the way she ends the aforementioned essay on the false narrative of hierarchical oppression, published well over 30 years ago:

Now read it again, and see if it doesn’t ring as true now as ever, and if we still don’t need to learn that lesson, together.