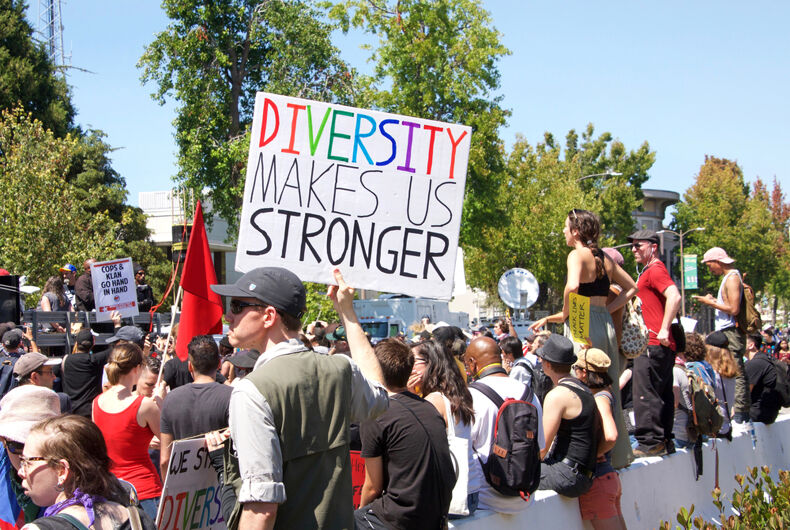 The Southern Poverty Law Center (SPLC) is out with its latest rundown of hate groups in America, and it’s as disturbing as you think. There are nearly 1,000 hate groups in the country–954 to be precise. That’s actually a 4 percent increase over last year, showing that hate is increasing at an alarming pace.

Of course, the increase is to be expected when the President of the United States declares that many neo-Nazis are “very fine people.” The Trump administration is fueling the rise in other ways, including rolling back or simply opposing nondiscrimination protections.

SPLC breaks the hate groups down by specialty, so to speak: anti-Muslim, anti-immigrant, etc. Of the 954 groups, a paltry 51 are dedicated solely to anti-LGBT issues. The list includes Focus on the Family, whose leader, Tony Perkins, is one of Trump’s spiritual advisors and biggest supporters.

But don’t let that small number fool you. All hate groups believe in equal opportunity when it comes to bigotry. White supremacist groups, for example, are rife with homophobia. They and the other specialty groups are not counted among the 51 specifically anti-LGBT groups, but they are every bit as much a threat.

There’s new evidence to back that claim up. ProPublica has uncovered a series of chat logs from Atomwaffen, the white supremacist group to which Samuel Woodward belonged. Woodward has been charged with the murder of 19-year-old Blaze Bernstein, who was gay and Jewish, and burying his body in a shallow grave.

The chat logs reveal stomach-turning celebrating of Bernstein’s death by Atomwaffen members. One member lauded Woodward as a “one man gay Jew wrecking crew.” Another simply said, “I love this.”

Over the course of several months, Atomwaffen members have been accused in five murders; another pleaded guilty to weapons possessions after he was found with a cache of explosives in a possible plot to blow up a nuclear power plant.

Of course, the threat from right-wing extremist groups takes a back seat to the presidential rhetoric about the potential threat from Muslims and immigrants. But the fact is that the home-grown threat is the real problem. SPLC found that 43 people were killed and 67 wounded by young men associated with the alt-right over the past four years. Seventeen of the deaths came in 2017.

If you think that the problem is confined to rural America, think again. There’s probably a group close to you. Here’s a list of the states with the largest number of hate groups.

How Billy Graham paved the way for the religious right