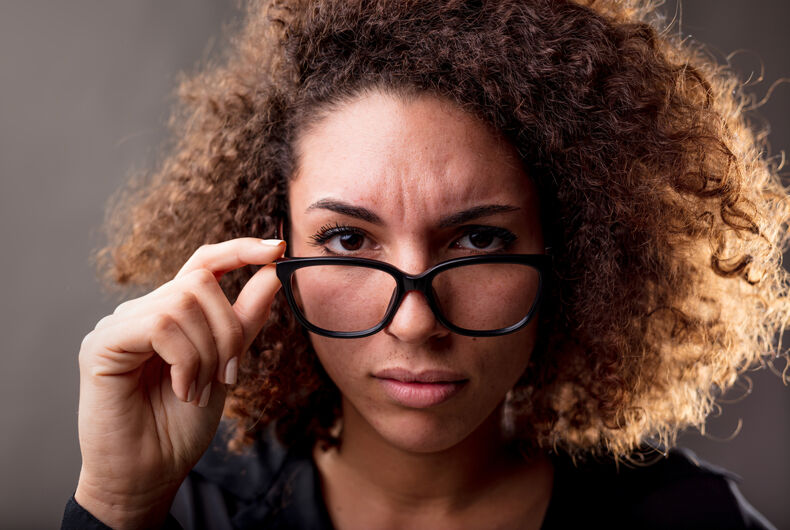 I’ve never been comfortable basing our rights on a ‘we can’t help it’ rationale. It suggests that we’re somehow pitiful things – that non-exclusively heterosexual sexual orientation is a defect instead of every other point on the infinite-points line that is normal human sexual orientation.

It also begs the denial of rights to those who do exercise any level of control over their attractions (the stuff of sexual orientation at the combined sexual, affectional, and emotional levels) if such a thing is possible or to make conditional of those rights the exercising of abstinence or other-directional control of behavior related to those attractions.

Worse, this be-nice-to-the-queers-’cause-they-can’t-help-it strategy sends a message of brokenness to our people when we should be instilling pride and strength in who we are.

The Kinsey researchers, as if they were precursors to The Matrix’s Morpheus, used to ask a question of their gay-identified subjects, “If you could take a pill that would make you not homosexual, would you?” Most in those dark days near the dawn of our fight answered that they would.

‘Neo’-queer that I am, I would not take that pill. I prefer to live an authentic life, unplugged from the matrix of het convention, demanding in body, soul, word, and deed to be exactly the queer I am blessed to be.

If truth be known, I’m a gay supremacist, firm in the knowledge that we’re better than hets in many ways that matter to me (and were proven superior by researchers acting on behalf of the U.S. Army, no less, trying to figure out if they could more easily tell who the queers were so they could more efficiently keep us out of the service).

Even if I wasn’t a queer supremacist and despite having suffered loss of family, jobs, and other opportunities, as well as having been subjected to anti-gay violence, including rape, due to my sexual orientation – enough of the standard reasons given for why people in their right minds wouldn’t choose to be queer to count and then some – I’d still choose to be a lesbian and it doesn’t define me as crazy.

How else, after all, would I have the spousal love of my wife that grows fuller and deeper with every day of our lives? Where would I find such a delightful subculture so rich with beauty and humor and the sort of strength forged in adversity that so fits my soul?

I love our freedom to define ourselves as we see fit and the creative diversity with which we’ve done so. If I were exclusively heterosexual, I’d be denied the depth of intimacy that comes from sharing love with someone whose body and mind responds so like mine and would be relegated to the state of never really fully grasping what the object of my affection really felt – that always reaching, never quite there no matter how hard they try existence that hets suffer.

They may say vive l’difference. Although I’ll admit to feeling compassion for their loss, I say horsepucky– vive l’homogeneite!!

Now, don’t get me wrong, I don’t support any sort of anti-het oppression. After all, some or all of them might not be able to help it.

Did the FBI force a ‘confession’ from the Pulse shooter’s widow?