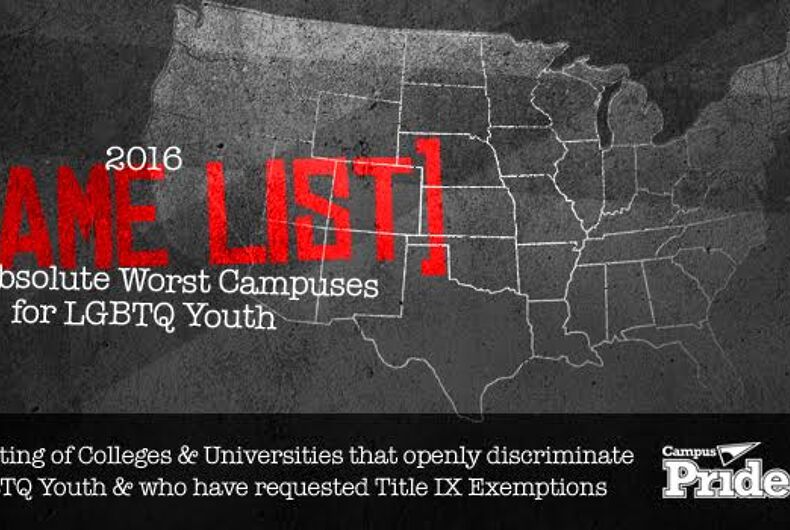 Religious universities can apply for an exemption from federal anti-discrimination law. Concordia University does not have an exemption. Campus Pride compiles a "Shame List" of these schools, because prospective students should know if they'll have fewer rights at a university.Photo: Screenshot/Campus Pride

An LGBTQ student group had its charter rescinded by university officials – despite the university’s non-discrimination policy – but the club was reinstated after the students spoke out against the school’s discrimination.

And they even got a little help from RuPaul’s Drag Race winner Jinkx Monsoon.

Almost four years ago, students formed the Queer-Straight Alliance (QSA) at Concordia University – Portland, in Oregon. Concordia is associated with the homophobic Lutheran Church-Missouri Synod that believes that gay people are “intrinsically sinful.”

So while Christian universities are legally allowed to discriminate, Concordia was clearly telling prospective LGBTQ Christian students that they would be welcome on campus.

Over the years, the QSA became one of the more popular clubs on campus. It was elected “Best Club” by the student body two years in a row, and its founder Ernest Dominguez, who is gay, was elected president of student association.

The administration, though, has repeatedly discriminated against the group, according to students. Willamette Weekly reported that administrators tore down the club’s posters and canceled the group’s events. In a statement, the students said that appearances by three queer artists that the QSA invited to campus were canceled.

A spokesperson for Concordia even acknowledged this history. “The reality is that sometimes people make mistakes,” the spokesperson said.

Concordia also forced the QSA to change their name to “PRIDE” because the word queer “would be seen as sanctioning homosexuality/sin.” The students filed a Title IX complaint and won after an investigation by the school’s equity review panel “found that the university was in violation of the student nondiscrimination policy, specifically in relation the PRIDE club representing our LGBTQ students.”

The school administration responded by launching a review of all club charters and promising to revise the club charter requirements “to be consistent with the university’s mission and values, and our nondiscrimination policy.”

The result? They found only one club needed to be disbanded: the QSA.

The administration had a problem with the QSA’s stated purpose, which includes the phrase “raise awareness and change perception of Christian folks.” Administrators contended that the phrase is “maybe not respectful/honoring of the University’s Christian identity and values or of Christian values,” while the students said that it was an essential part of their mission.

The language has been a part of the QSA’s charter since it was founded four years ago.

The group held its last meeting last Monday, January 15, which was complete with a pink pinata.

“I’m really concerned that graduating, queer students on campus are in a worse position than when I started four years ago,” Dominguez said.

Over the past week, the students made some noise about their club getting rescinded. They released a statement accusing Concordia of saying that the school was “sad” to see the QSA end and implying that the students decided to end the group themselves.

“Concordia University Portland does support the Queer Straight Alliance, and we have for many years, and we continue to support the club,” a university spokesperson said after the school shut down the QSA.

The students asked supporters to call the board of Portland Public Schools to demand an investigation into possible discriminatory practices at Faubion Elementary School, a public school that partners with Concordia University.

And Jinkx Monsoon posted their statement, giving them a much wider, national audience.

It only took a day for Concordia President Charles Schlimpert to reverse the administration’s decision and accept the QSA’s charter.

In an open letter posted to Facebook, the QSA said that they were “cautious about the university’s ability to follow through on these promises” but still “happy” about them.

It remains to be seen if the university follows through with these promises. But Concordia students have shown that they’re not going to quietly give up their QSA.

Obamacare helped a lot of LGB people get insurance

Stephen Miller is behind the ill-fated government shutdown