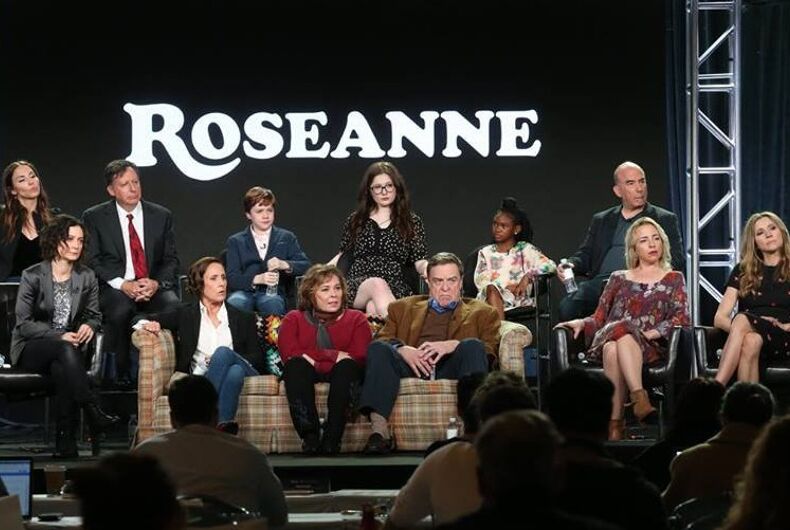 Roseanne Barr is a Trump supporter who has regularly filled her Twitter feed with crazy conspiracy theories, wild claims about Trump’s “successes,” and vehement defenses of her support for the president.

With a reboot of her iconic sitcom, Roseanne, in the works, the star has left the social media site after a long and protracted rant about liberals and Trump. But she is still slinging those half-cooked theories in public.

During a Television Critics Association panel discussion about the upcoming season of the show, Barr faced multiple questions from reporters about her, and her character’s, support for Trump.

“In the Roseanne show, I’ve always tried to have it be a true reflection of the society we live in. I feel like half the people voted for Trump and half didn’t, so it’s just realistic,” she said, while explaining why her character on the show is a Trump supporter.

“And, in fact, it was working-class people who elected Trump, so I felt like that was very real and something that needed to be discussed and especially about polarization in the family and people actually hating other people for the way they voted, which I feel is not American,” she added.

That is a common myth that is still floating around. In fact, white people of all economic strata voted for Trump. It was more an identity politics move than one based on income, as an excellent feature from The Atlantic outlines. It is ironic, considering how many conservatives criticize identity politics.

When a reporter asked why her character on the show, Roseanne Conner, who spoke out against bigotry, would support Trump, calling him a “xenophobe,” she pushed back.

“That’s your opinion,” she said.

Barr then drifted into conspiracy town, saying she couldn’t vote for Clinton because of Haiti, citing the debunked claim that the Clintons raised hundreds of millions of dollars for a hospital in the country that was never built.

She also claimed that she would be a better president than both Oprah Winfrey and Susan Sarandon, and maybe even better than Trump himself.

The Roseanne reboot premieres in March, on ABC.