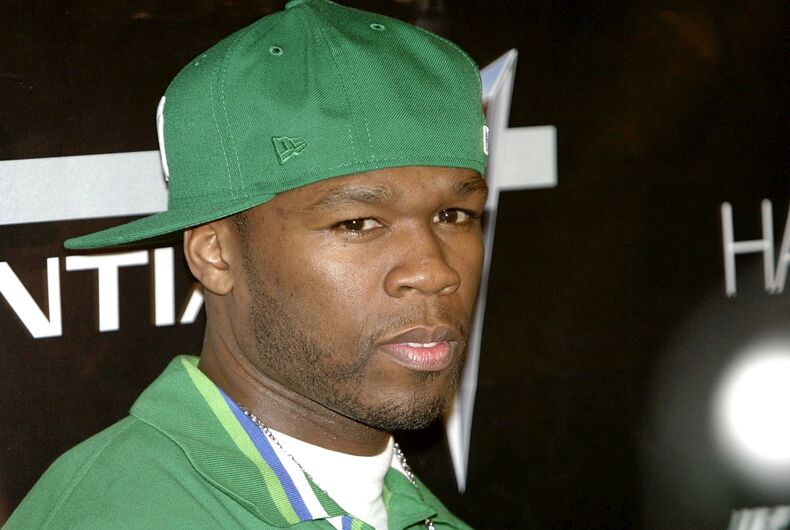 Perhaps trying to find his way out of obscurity and back to pop culture relevance again, rapper Ja Rule has engaged in a Twitter spat with fellow hip hop artist 50 Cent calling him a “power bottom.”

For those who don’t recall (and we know there are many of you), Ja Rule scored some hits in the Y2K era, with songs like “Put it On Me” and “Always There” topping the charts. He took a hiatus in 2005 which culminated in prison stint for a number of crimes including drug possession and tax evasion. Since his release from jail in 2013, he’s struggled to make a career comeback.

Now Ja Rule has rattled off a series of homophobic insults directed at fellow rapper 50 Cent, reviving a longtime feud between the two artists. After hearing that 50 Cent had promised to “knock out” Ja Rule if the two ever met in person, Rule referred to 50 Cent as a “tickle booty” in a tweet. He went on to elaborate that 50 Cent allows men and women to play with “his butthole,” and “a power bottom.” 50 Cent did not respond.

The Twitter rant is not Ja Rule’s first homophobic outburst. In 2010, Ja Rule posted a message that men who do not have sex with women should “just kill” themselves. The message came in response to the suicide of 19-year-old Tyler Clementi, a closeted student who was clandestinely filmed by his roommate having sex with another man.

As for Ja Rule…couldn’t he just shut up and retire?

Dick riding is NOT a form of transportation… it’s getting you nowhere!!!

Some of you are waaay to invested in this corny 100 year old beef lol… fuckin weirdos!!! This shit is fun and games for me… IM RICH BITCH!!! 😂🤣😭

Lmao it’s funny when I talk shit I’m twitter fingers… when he talks shit he’s savage and the bully… y’all be on #ticklebooty dick too hard… I SAID HES PUSSY!!! @50cent

I really don’t see why ppl like @50cent aka #Powerbottom 🤣 he hates on any black man or woman having success… he hates on Diddy on Jay on Empire cmon how you beefing with Taraji??? #ticklebooty #bitchassnigga

Fuck @50cent he’s a piece of shit human being right up there wit @realDonaldTrump!!!

Cmon EVERYONE knows I make better music am a better artist he stole my whole style… THATS MY SON… https://t.co/qXJyGMn76v

Can this Atlanta gay bar survive its owner’s racist tirades on Facebook?