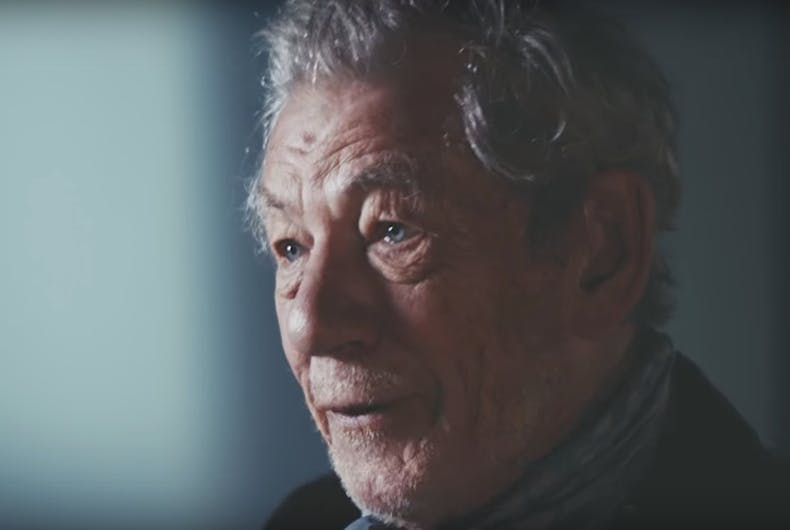 Actor Ian McKellen marked the 30th anniversary of his public coming out with a tweet, saying that he has “never met a gay person who regretted coming out – including myself.”

I’ve never met a gay person who regretted coming out – including myself. Life at last begins to make sense, when you are open and honest. Today is the 30th anniversary of the BBC radio discussion when I publically said I was gay. So I’m celebrating!

In 1988, the UK was about to pass Section 28, which said that local governments “shall not intentionally promote homosexuality or publish material with the intention of promoting homosexuality” or “promote the teaching in any maintained school of the acceptability of homosexuality as a pretended family relationship.”

In the months leading up to Section 28’s passage, straight pundits and politicians took every opportunity to scaremonger about “predatory homosexuals” trying to recruit children.

One Member of Parliament even said, “I do not agree with homosexuality. I think that [Section 28] will help outlaw it and the rest will be done by AIDS, with a substantial number of homosexuals dying of AIDS. I think that’s probably the best way.”

In 1987, McKellen visited San Francisco, where he says he learned “that coming-out was crucial to self esteem.” In early 1988, he appeared on a radio show to discuss Section 28 with a newspaper editor who defended the homophobic law.

McKellen, “riled by the bland pomposity of his homophobia,” decided to come out. He later said that it “probably surprised me more than my being gay can have shocked any listener who knew my work.”

He continued to protest Section 28, which passed later that year and was repealed in 2003.

And he has been working to advance LGBT rights ever since.

This legendary singer did drag for a KFC ad. Cue the conservative outrage.

Dennis Peron, the gay ‘Father of Medical Marijuana,’ passes away