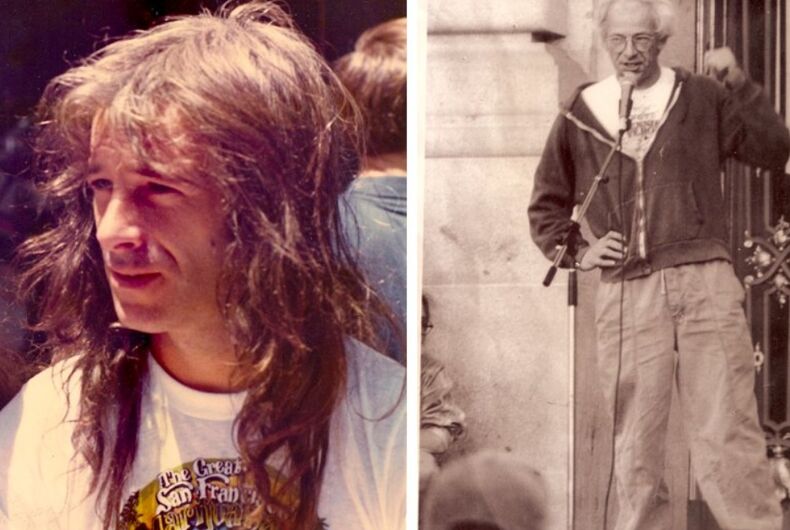 Dennis Peron, known for his work promoting medical marijuana, passed away yesterday at 71.

Peron was one of the early activists who promoted marijuana for its health benefits, playing an important role in distributing cannabis to people with HIV/AIDS in the late 80’s.

In the 90’s he helped organize the movement to legalize medical marijuana, first in San Francisco and then in California.

Originally from New York City, he learned early on how to pretend to be someone he’s not. “Number one, I was gay,” Peron said in a 2014 interview. “I knew I had to hide. Somehow I had to hide. I was a good actor. A good hider.”

He joined the Air Force in 1966 and first tried marijuana in Vietnam, bringing some back to the U.S. with him after his first tour.

In 1967, he visited San Francisco for the first time. “It was the Summer of Love,” he said. “The hippies, those people accepted me. I said, ‘I’m going to do everything I can to come back to San Francisco and live my life here.”

“I decided I’d be a hippie faggot,” he said.

In the years that followed, he earned a living by selling marijuana, often getting busted but only doing one stint in prison in the late 70’s when he was caught with 200 pounds of weed.

In the 80’s, he lived with his partner Jonathan West in the Castro, where he learned about the beneficial effects of medical marijuana for people with HIV/AIDS, especially when it came to helping them keep on weight.

Jonathan “was wasting from 142 pounds down to 110,” he later said, but marijuana helped him keep his appetite and keep food down.

Jonathan succumbed to the disease in 1990.

“At that point, I didn’t know what I was living for. I was the loneliest guy in America,” he told the LA Times. “In my pain, I decided to leave Jonathan a legacy of love. I made it my moral pursuit to let everyone know about Jonathan’s life, his death, and his use of marijuana and how it gave him dignity in his final days.”

A year later, he got to work on Proposition P, a popular ballot initiative that legalized medical marijuana in San Francisco.

After that passed, he opened the nation’s first public cannabis dispensary when he ran the Cannabis Buyers’ Club, which helped over 9000 people with HIV/AIDS, cancer, and other illnesses get medical marijuana. It was raided and shut down by the state in 1996.

In 1996, Peron worked to pass Proposition 215, a ballot initiative to legalize medical marijuana in California. This was a harder pull.

“I knew I had to get everybody. Clergy, doctors, nurses…. This coalition was pretty forceful. They just wanted change. They didn’t want people to go to jail for marijuana. And if it helped patients, why can’t they have it?” It passed with 56% of the vote.

After his buyers’ club was raided, he and his partner John Entwistle moved the country, eventually coming back to San Francisco when Peron was diagnosed with lung cancer. He remained an outspoken advocate of decriminalization and LGBT rights, and married Entwistle when California recognized marriage equality.

“The city and the country has lost a cannabis leader who lived life on the edge,” said Terrance Alan, a member of San Francisco’s Cannabis Commission. “Not many people would have had the courage at the time that he took up the mantle.”