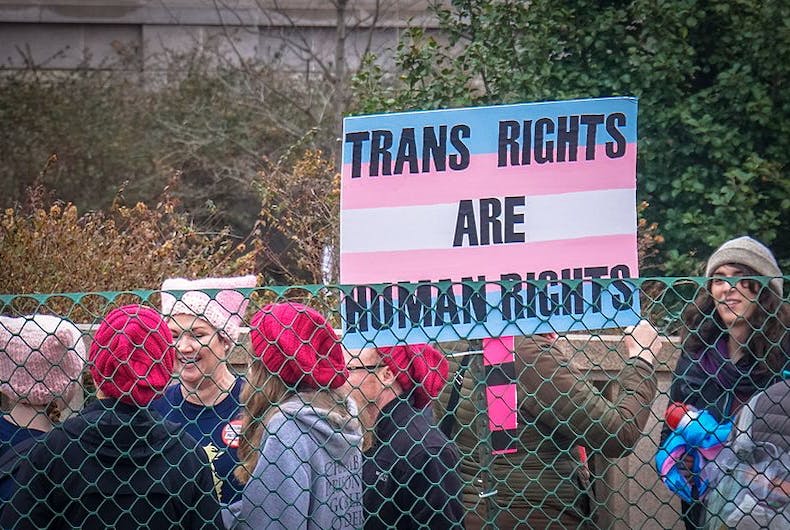 A federal judge in Illinois has ruled in favor of allowing a northwest school district to continue granting transgender students the right to use facilities matching their gender identity.

Judge Jorge Alonso’s 15-page ruling upheld the opinion that anti-discrimination statutes extend to trans and gender-nonconforming individuals, and so refused to impose a a temporary injunction against Palatine-based Township High School District 211.

A group of more than 50 families sued the district in 2016, arguing that allowing trans students to use bathrooms and locker rooms matching their gender identity, instead of only the gender assigned to them at birth, violated the privacy rights of cisgender students. Those families have also ironically claimed that including trans students in anti-discrimination policies somehow amounts to preventing the cisgender students from having access to a nondiscriminatory education.

The families have not officially lost the civil case with this ruling, and are looking into an appeal. Considering the judge’s refusal to issue an injunction, however, it seems unlikely that he will find in their favor.

The lawsuit came after the school district agreed to allow a trans student to use the girls’ locker room after she filed a complaint to the U.S. Department of Education. A federal magistrate in Chicago recommended the injunction not be granted back in 2016, and Alonso agreed with that decision, both arguing that the families had failed to prove their rights were violated or that they would face serious harm.

A slate of candidates who promised to roll back the policy failed in 2017 when voters overwhelmingly rejected them and stood up for trans students.

The families, including a group called Students and Parents for Privacy, are being represented by the far-right legal group Alliance Defending Freedom.

The Parents for Privacy group is pledging to continue the fight.

“It’s not over. We will not rest until the privacy rights, dignity, and well-being of all students are protected equally,” a Facebook post reads. It also includes a link to Alliance Defending Freedom, asking for funds.

Senior attorney for the Alliance Defending Freedom, Gary McCaleb, also said his group will continue objecting to “school district policy (that) compromises the personal privacy of young male and female students. And no child should be forced shared to share privacy facilities with another child of the opposite sex. And no school should impose a policy that so clearly violates the right to bodily privacy.”

“Throughout this litigation, one thing remains clear: The groups who filed this case remain unable to demonstrate any harm to their clients resulting from sharing restrooms and locker rooms with students who they perceive as different,” John Knight, director of LGBT and HIV Project at the ACLU of Illinois, said in a statement.

He also noted that the judge “confirmed there is no constitutional right to refuse to share a restroom or locker room with students because they are transgender.”