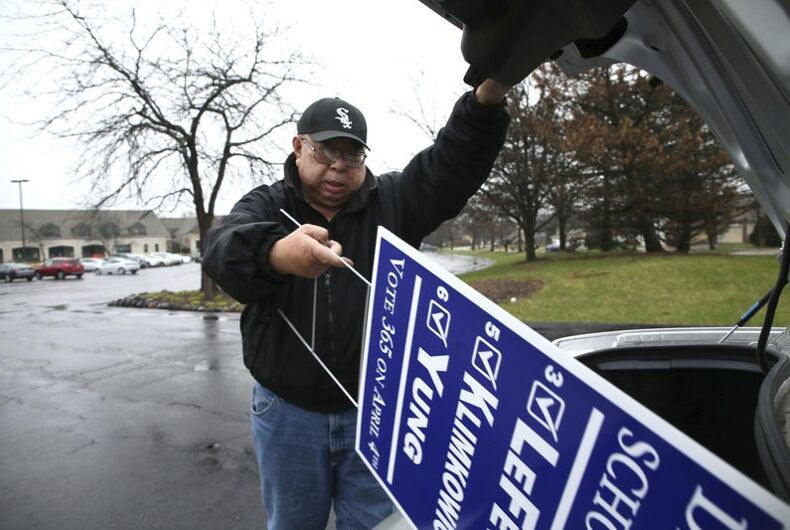 A slate of candidates who promised to roll back a policy allowing high school transgender students to use the facilities of the gender with which they identify failed Tuesday in their effort to get on a suburban Chicago school board.

The Palatine Township High School District 211 policy allowing transgender students to use the locker rooms and bathrooms of the gender they identify with prompted three opponents to run for the school board. Unofficial results late Tuesday show two incumbents and a former member supporting the transgender policy were elected.

“I think the community is aware of the transgender issue, but is supportive of the solution that we came up with because it was the most fair for all students,” Anna Klimkowicz, one of the member, told the Daily Herald in Arlington Heights.

The three challengers supported the lawsuit. The Chicago Tribune reported the opponents drew financial support from a donor who has given millions to conservative causes.

Vicki Wilson, who co-founded Parents for Privacy, said parents have a reasonable expectation that private areas such as locker rooms are designated by biological sex.

“There is a path forward where all students are protected and respected,” she said. “I’d say, ‘Let’s get you an accommodation, but not in the girls’ locker room.'”

The district in response made a deal with the student in December 2015, agreeing to let her use the girls’ locker room with the understanding she would use a private changing station that other students also can access.

President Donald Trump’s administration has rescinded Obama administration guidance and left it to states and school districts to interpret U.S. anti-discrimination law and determine whether students should have access to restrooms in accordance with their expressed gender identity, and not just their sex at birth.

Blink 182 guitarist responds to homophobia like a rock star