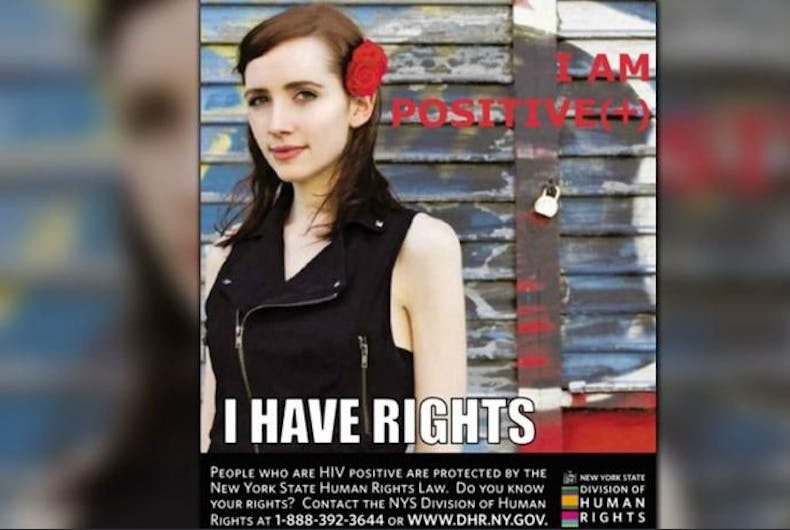 Avril Nolan in the ad she has said brought her distress.Photo: New York State Division of Human Rights

A model who unwittingly became the face of a campaign for the rights of those living with HIV/AIDS can continue her fight against the state of New York due to societal stigma against the illness, a court has ruled.

The ruling, handed down by the Appellate Division First Department, found HIV “continues to be a significant stigma,” is the first of its kind in the country.

Avril Nolan, who is not HIV positive, sued the state’s Division of Human Rights, the agency responsible for the citywide campaign, in 2013 for $1.5 million. Nolan claimed the ad campaign’s use of her photo, which she learned about in April of that year from her Pilates instructor, caused her to become “instantly upset,” and argues that it has hurt her both personally and professionally.

“I am positive (+)…I have rights,” the text read over her picture. Underneath it informs that people living with HIV are protected by the state’s human rights laws.

Nolan runs a vintage clothing and jewelry company. The image that ended up in the campaign was taken by a photographer friend for an online music publication around 2011. He then sold the rights to Getty Images, where the Division of Human Rights found it and purchased the rights to use it in the ad.

The state argued that society has progressed with their views surrounding HIV/AIDS, and cited celebrities such as Magic Johnson and Charlie Sheen who are living with HIV as helping bring more awareness and acceptance.

“HIV is no longer a shameful condition worthy of heightened treatment under the defamation laws,” it argued.

“A significant segment of society has been too slow in understanding that those who have the disease are entitled to…the full embrace of society,” wrote in its unanimous ruling.

The case will now return to the Court of Claims.

Getty has already reached a settlement for an undisclosed amount with Nolan. Their license agreement prohibits the use of their photos in a way that would be “unflattering or controversial to a reasonable person.”

This couple ordered wedding programs, but got ex-gay conversion pamphlets instead