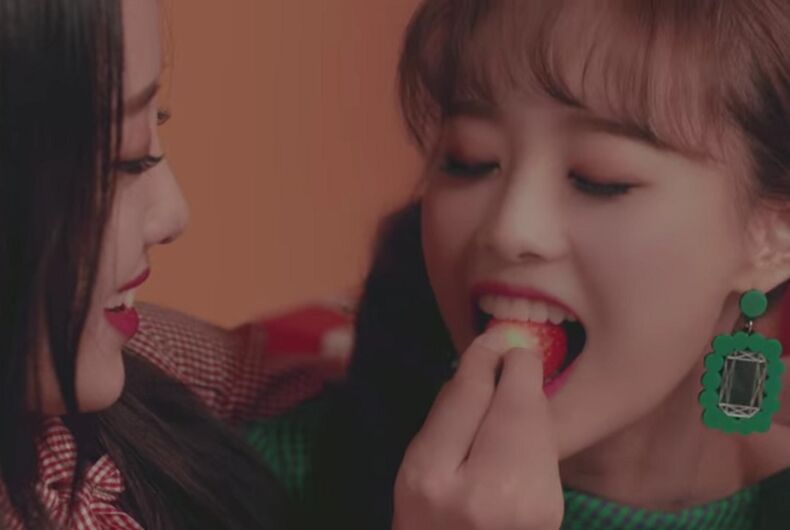 Korean girl group Loona just released their video for “Heart Attack,” which tells the story of one girl pining after another.

Loona still hasn’t put out their debut album. Instead, they are releasing singles featuring each of the group’s members one at a time. “Heart Attack” is Chuu’s debut song.

A month ago, Loona released the video for “new,” which was Yves’s first lead vocal credit with the group. You might recognize her as the object of Chuu’s affection in the “Heart Attack” video, and “new” contains some same-sex hand-holding and a whole lot of apples.

At the moment, no one in Loona has come out, and maybe this is all just a way of creating buzz for the girl group.

But some of the lyrics might speak to a deeper meaning. For example, Chuu sings about her hidden feelings in “Heart Attack“: “Even my hidden secrets that only I knew/That mood that I wanted to tell you all about.”

The ad copy released with “new” says that the story is that Yves doesn’t know if she should follow God’s plan for her or if she should live authentically: “Yves asks a question in Eden. ‘Is it really a bad thing to disobey God?’ If someone has already decided our fate, wouldn’t it be a better life to stand up and against that fate?”

They might just be using same-sex love as a marketing tool, or maybe they have something deeper to say about it. Fans will find out in 2018.

Aussibum apologizes for a racist message that appeared in an ad

Dept. of Silver Linings 2017: The religious right is splitting apart under Trump