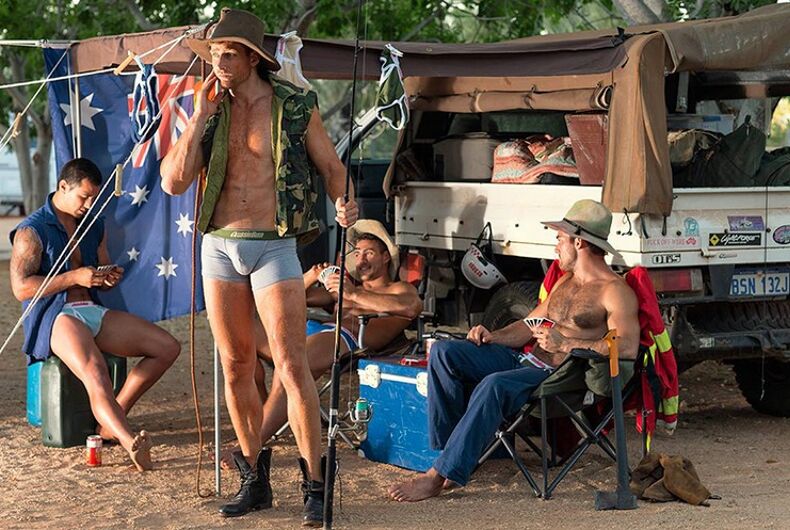 Aussiebum, the Australian men’s swimwear and underwear brand, has issued an apology for a racist message that they say accidentally appeared in an ad.

The ad was released earlier this week on social media and features models posing in front of a truck. A closer look showed that no one looked closely at that truck before the shoot.

kinda weird the truck in this ad has a FUCK OFF WE'RE FULL sticker, a phrase beloved by racist Australians everywhere pic.twitter.com/C3rVhhEgWz

Aussiebum founder Sean Ashby said that the photos were taken three years ago in a parking lot. “I never picked up on the sticker’s caption,” he told Gay Star News.

“I do apologize regardless and should have paid closer attention to the fine print details,” Ashby said. “It’s not in my company’s character to be racist and I put this down to an innocent oversight on my part. I’ve arranged to have this taken down. When I get back from holidays I will however update the image and replace it with a slogan that best fits my companies personality.”

The images have been removed from Aussiebum’s social media accounts.

Australia is one of the least densely populated countries in the world – only Namibia and Mongolia are less “full.” While a lot of the country isn’t a particularly nice place to live, the same could be said about Russia and Canada, both of which are more densely populated than Australia.

Also, it’s likely that the people saying that Australia is “full” are the descendants of immigrants who arrived in the last three centuries. But I’m sure that racists in Australia, like their counterparts in the U.S., have an elaborate explanation about why they belong there but immigrants of other colors don’t.