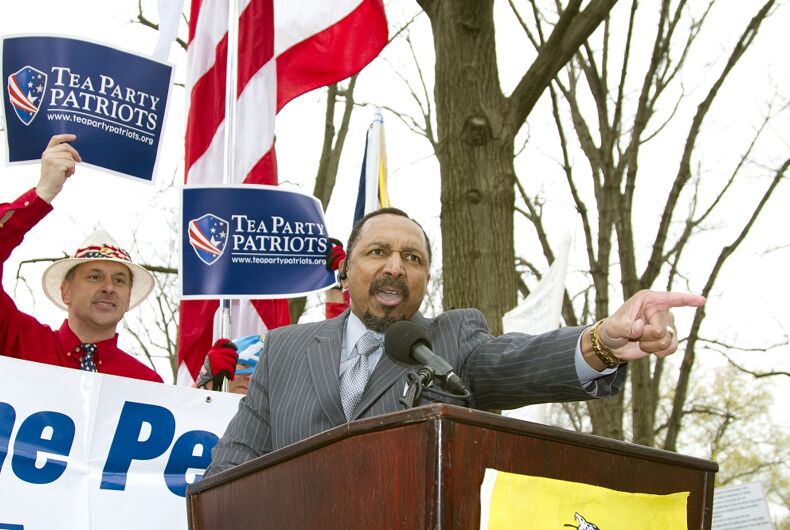 E.W. Jackson at a Tea Party rally in 2011. Jackson once said that Barack Obama "clearly has Muslim sensibilities."Photo: Wikipedia/Mark Taylor

A Republican Senate candidate said that he made outrageously homophobic statements because he thought only Christians were listening.

E.W. Jackson is a primary candidate for U.S. Senate from Virginia, and, like many Republicans, has a history of saying terrible things.

Jackson said gay people “sexualize [children] at the earliest possible age” and that there is a “direct connection” between homosexuality and pedophilia. He has also said homosexuality “poisons culture, it destroys families, it destroys societies; it brings the judgment of God unlike very few things that we can think of.”

He also once said that liberalism has killed more Black people than the “Ku Klux Klan, lynching and slavery and Jim Crow ever did,” and that homosexuality specifically is “killing Black men by the thousands.”

Homosexuality also hurts Black women, according to Jackson. He said that “young Black ladies” have complained him that “so many” young African American men “are homosexuals.”

So he’s an unhinged homophobe who wants to be elected in the purple state of Virginia. He could renounce those statements, apologize, and promise to do the right thing from now on.

Or he can complain that his words were taken out of context.

In an interview with the Richmond Times-Dispatch, he said that those statements were not “said not in the context of a campaign but on Christian radio where I’m speaking as a pastor and minister to Christians.”

He did not explain why it’s more appropriate to make hateful and vulgar comments if only Christians are listening.

Stopping short of apologizing for what he said, Jackson said he “regrets” using words “that make people think I look down on them,” implying that he was misunderstood when he said gay activists are “killing people.”

Jackson still opposes all LGBTQ rights, including marriage equality and anti-discrimination laws. But now he’s going to oppose LGBTQ equality “without implying some sort of hostility against gay people or transgender people.”

In fact, if he sees someone hurting a gay or transgender person, he promises to personally step in “and physically fight for them.”

That’s not really much of a campaign promise, unless he believes there’s a good chance that Orrin Hatch will physically attack Tammy Baldwin on the floor of the U.S. Senate.

Oliver Willis points out that Jackson made similar excuses during his failed 2013 campaign for Lt. Governor, saying that he was “not comfortable being depicted as a person who hates people or a person who wants to hurt people or be mean and nasty to people.”

A masked man attacked an LGBT center in D.C.