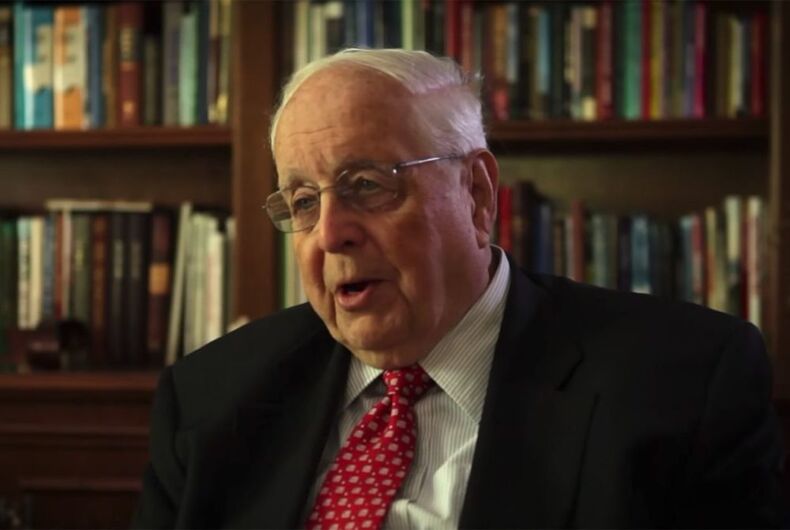 Paul Pressler, a former judge and Texas legislator and a key figure in the Southern Baptist Convention (SBC), has been sued for allegedly abusing a minor in the 1970’s and 1980’s.

The suit brought by Duane Rollins says that Pressler, 87, met the teen at the First Baptist Church in Houston in the 1970’s. At fourteen, Rollins was enrolled in Pressler’s Bible study class, and the older man allegedly began molesting and raping the teen on a regular basis in his master bedroom study.

The suit says that Pressler told Rollins that he was “special” and that the sexual contact was a “God-sanctioned secret.” The abuse happened several times a month when he was in high school and continued even when he went away to college.

Rollins said that he suppressed the memory of the abuse until he worked with a prison psychologist in 2015. A psychiatrist who has worked with him for a year wrote a letter supporting the suit, saying that he is a “reliable historian for the childhood sexual trauma to which he was repeatedly and chronically subjected.”

Pressler’s attorney pointed to Rollins’s long criminal record as a reason to doubt his story. His has been convicted of possession of a controlled substance, burglary, forgery, and several DUIs.

Rollins’s attorney Daniel Shea, though, said that the abuse pushed Rollins to drug and alcohol abuse. The psychiatrist’s report also says that Rollins is suffering from post-traumatic stress disorder due to the years of abuse.

Pressler says that accusations are false and that the lawsuit is an attempt to extort money, but he doesn’t deny knowing Rollins. In fact, when Rollins was eligible for parole after spending a decade in jail for burglary, Pressler wrote letters in 2000 and 2002 to the parole board promising to be “personally involved in every bit of Duane’s life with supervision and control,” which included employing Rollins as an office assistant at his law firm.

In 2004, Pressler settled a civil lawsuit with Rollins for battery stemming from an incident in a Dallas hotel room. The details of the settlement are not public, but court records reference an agreement.

The lawsuit also names Pressler’s wife, his law partner, and his law firm as defendants, alleging that they knew what was going on but did nothing.

The Southwestern Baptist Theological Seminary, its president, and the First Baptist Church are also named as defendants because they “fraudulently misrepresented to the public in word and deed, including to Plaintiff Rollins and his mother, that Pressler was a Godlike, sexually safe, moral, and great person of the earth who, as a Magistrate, worked God’s wisdom and thus would not be sexually dangerous to minors.”

Since the lawsuit was filed last week, Shea says that he has been contacted by others who say they were abused by Pressler. “I’m getting a lot of responses from a lot of people,” he said.

He said that he plans to disclose the names of other alleged victims if they want and that he’s open to other victims adding themselves to the lawsuit.

Pressler is a well-known figure in Texas’s religious right movement. He was a key strategist in the SBC’s “Conservative Resurgence” in the 1970’s and 1980’s, a movement within the SBC that ousted liberal and moderate church leaders from office.

He started his career in politics as a state representative from 1957 to 1959 and was a state judge from 1970 to 1992. He publicly supported Ronald Reagan, George H.W. Bush, George W. Bush, and Fred Thompson for president.

Pressler has served on the Texas Republican State Executive Committee, the Southern Baptist International Mission Board, and the Free Market Foundation, as well as several other organizations.

In 1989, President Bush considered appointing him to the Office of Government Ethics, but changed his mind after an FBI background check. What that background check found is not public knowledge.