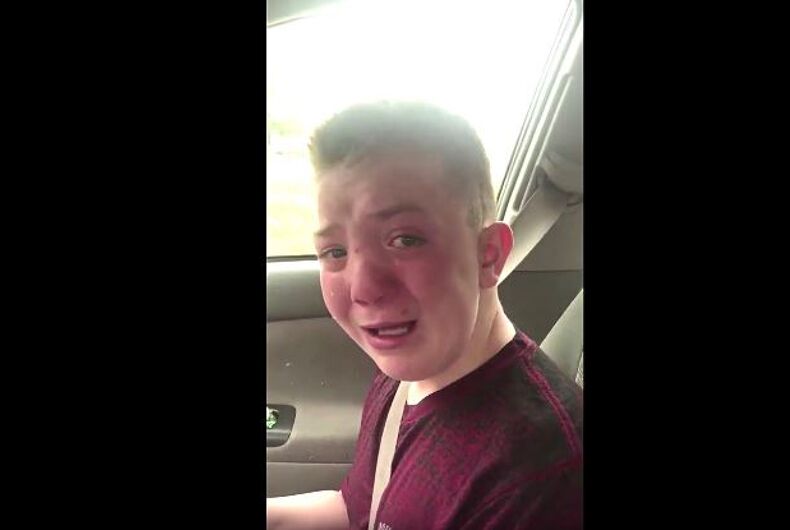 Keaton Jones in a now viral video talking about being bullied at school.Photo: YouTube screenshot

A bullied teen in Tennessee is being surrounded by messages of support, and then some, from both celebrities and everyday folks, after a video his mother posted went viral.

Keaton Jones’s mother posted a video to her Facebook page of her son detailing the verbal and physical abuse he has been subjected to at school by his peers, and, through tears, calling for an end to bullying.

His mother explained that her son asked her to record the video, after she picked him up because he was too scared to go to lunch. He describes having milk poured on him, ham shoved down his clothes, and bread thrown at him during a previous lunch period.

“Just out of curiosity, why do they bully? What’s the point of it? Why do you find joy in taking innocent people and finding a way to be mean to them. It’s not okay,” he says.

“People that are different don’t need to be criticized about it. It’s not their fault,” he continues. “But if you are made fun of, just don’t let it bother you. Stay strong, I guess. It’s hard, but it will probably get better one day.”

The video went viral, and soon messages of support came pouring in, many using the hashtag #StandWithKeaton.

Chris Evans has invited him to the Avengers premiere and told him to “stay strong” and not let the bullies turn him “cold.”

Stay strong, Keaton. Don’t let them make you turn cold. I promise it gets better. While those punks at your school are deciding what kind of people they want to be in this world, how would you and your mom like to come to the Avengers premiere in LA next year? https://t.co/s1QwCQ3toi

The hashtag is also showing up IRL.

Tennessee Tech has even offered him a scholarship.

You've shown us how to be bold, fearless, and confident. You're always welcome here, and there is a scholarship w/ your name on it waiting for you. #StandWithKeaton @Lakyn_Jones #WingsUp

Those bullies ought to be feeling pretty awful right about now.

And Keaton is probably feeling pretty great. Don’t you love when a story has a happy ending?