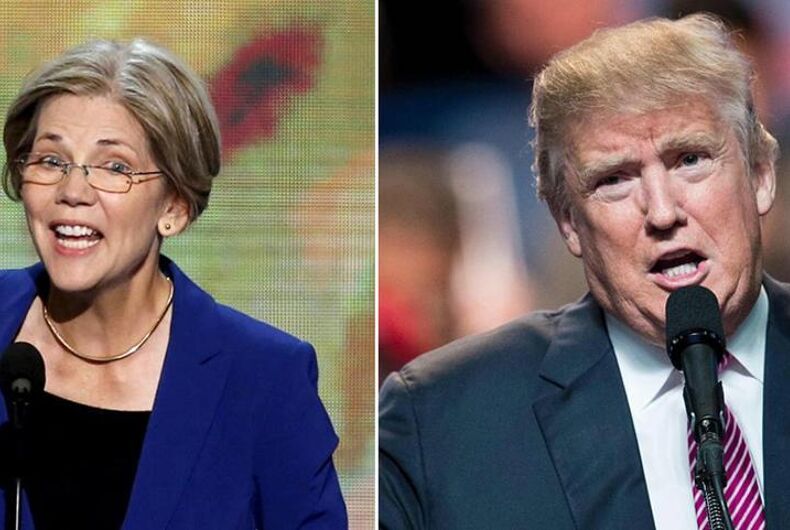 Donald Trump once again proved that he is absolutely incapable of showing an ounce of thought or respect at a White House ceremony honoring Navajo war veterans today. During the event recognizing the code talkers, Trump revived his attacks on Senator Elizabeth Warren, calling her “Pocahontas.”

“I just want to thank you because you are very, very special people. You were here long before any of us were here,” Trump said. “Although, we have a representative in Congress who has been here a long time … longer than you — they call her Pocahontas!”

Trump then turned to put his hand on the shoulder of a man behind him, adding, “But you know what, I like you. You are special people.”

Trump also referred to White House Chief of Staff John Kelly repeatedly as “the chief,” meaning the leader of a group of Native Americans.

Trump’s remarks were met with an icy silence from the Native American veterans for some reason.

“It is deeply unfortunate that the President of the United States cannot even make it through a ceremony honoring these heroes without having to throw out a racial slur,” Warren told MSNBC.

Warren has Native American ancestors. “I am very proud of my heritage,” Warren told NPR. “These are my family stories. This is what my brothers and I were told by my mom and my dad, my mammaw and my pappaw. This is our lives. And I’m very proud of it.”

The ceremony happened under a portrait of Trump’s favorite past president, Andrew Jackson. Jackson is best known for being a racist responsible for the genocide of thousands of Native Americans; his nickname was “Indian killer.” One year after becoming President, Jackson signed the “Indian Removal Act” ejecting 46,000 indigenous people from their homes.

How Trump referred to Elizabeth Warren in front of Navajo code talkers: "They call her Pocahontas" https://t.co/Q23kYmThNn pic.twitter.com/9u6rRPvdxV