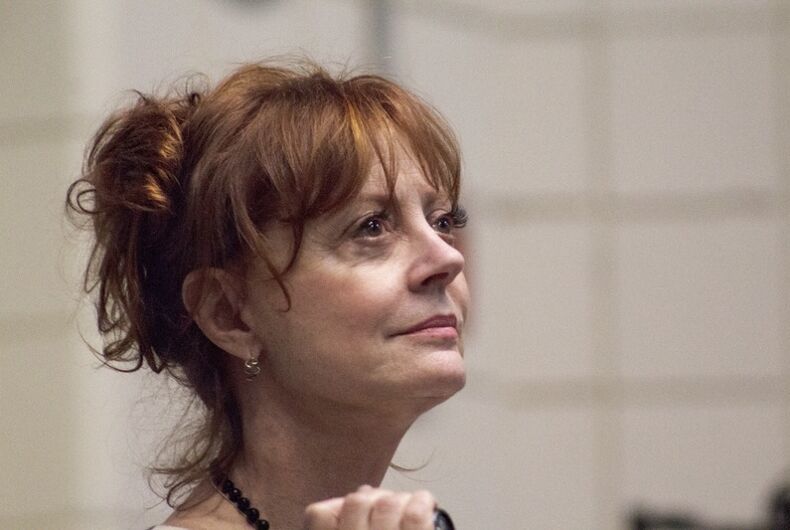 Susan Sarandon is still sooo not sorry she voted for Jill Stein and she doesn’t care who knows it.

In fact, Sarandon’s distaste of Hillary Clinton is still so potent she just said in an interview with The Guardian that she views the failed presidential candidate as so dangerous that had she won, we’d likely be at war.

“I did think she was very, very dangerous,” she said. “We would still be fracking, we would be at war [if she was president]. It wouldn’t be much smoother.”

Clinton is no dove, but the idea that Trump, who during the campaign refused to take using nuclear weapons against countries in the Middle East and Europe off the table and talked up the supposed benefits of “enhanced interrogation” techniques like waterboarding, is going to be less hawkish is a bizarre delusion.

As The Guardian notes, it wasn’t always this way. Sarandon supported Clinton’s 2001 run for Senate, but when she voted to authorize the war in Iraq, she lost the actress.

She instead supported Bernie Sanders in the primary, and then switched her allegiance to third party candidate Jill Stein once he was out of the running.

Sanders said she had to change her number due to receiving harassing phone calls from Clinton supporters, telling her things like, “I hope your crotch is grabbed” and “I hope you’re raped.”

She scoffs at the idea that her vocal support of Sanders and Stein over Clinton helped deliver a win to now President Donald Trump.

“Well, that’s why we’re going to lose again if we depend on the DNC [the Democratic National Committee]. Because the amount of denial…I mean it’s very flattering to think that I, on my own, cost the election. That my little voice was the deciding factor,” she said.

Perhaps the most misinformed statement she makes in the entire interview is in boosting the now thoroughly debunked claim that Clinton lost because poor people felt ignored and left behind by the Democrats, causing them to hitch their wagon to the oligarch Trump’s star.

In fact, economics had much less to do with it than did racism, nationalism, and, ironically, a backlash to identity politics.

An excellent piece recently published by The Atlantic, titled “The Nationalist’s Delusion,” lays out the true situation much more clearly, and with an evidence based argument instead of crystal ball punditry about how bad things might have been:

Clinton defeated Trump handily among Americans making less than $50,000 a year. Among voters making more than that, the two candidates ran roughly even…Voters making less than $50,000, whom Clinton won by a proportion of 53 to 41, accounted for only 36 percent of the votes cast, while those making more than $50,000—whom Trump won by a single point—made up 64 percent. The most economically vulnerable Americans voted for Clinton overwhelmingly; the usual presumption is exactly the opposite.

As far as how she feels being attacked, Sarandon said she isn’t taking it personally.

“It’s upsetting to me more from the point of view of thinking they haven’t learned,” Sarandon said. “I don’t need to be vindicated.”

Well that’s good, because she certainly hasn’t been.